Options Summer 2018: In 2015, South Africa stepped up its commitment to systems analysis by creating the Southern African Systems Analysis Centre–SASAC. Led by a consortium of four universities–the universities of the Western Cape, Limpopo, the Witwatersrand, and  Stellenbosch–SASAC aims to strengthen systems analysis activities by supporting Honours students, PhD students, and postdoctoral researchers. 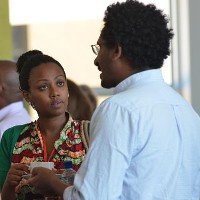 While addressing the future of science in a speech at the inauguration of South Africa’s Academy of Sciences in March 1995, President Nelson Mandela said “its health in this era of globalization depends critically on the exchange of ideas and collaboration in research across national and cultural boundaries.” That speech now seems prescient about the challenges South Africa’s scientists would face. That many of those scientists, including a new generation of PhD students, are using systems analysis and linking with IIASA to solve complex challenges in their country and on the African continent, would no doubt have pleased the much honoured Mandela.

South Africa joined IIASA in 2007, but the genesis of the country’s current engagement with systems analysis lies in the Southern African Young Scientists Summer Program (SA-YSSP), which ran for three years and saw close mentorship between IIASA and 80 scientists from the region, including 35 studying in South Africa. A review of the SA-YSSP in 2015 identified “a lack of in-depth training and capacity development for the students,” says Sepo Hachigonta, Director for Strategic Partnerships at the National Research Foundation (NRF), the government agency funding SASAC. Where the SA-YSSP offered a three-month program for PhD students, SASAC offers an honours module in global change and systems analysis, and scholarships for a three-year PhD in systems analysis or related disciplines. Two-month courses in systems analysis methods are also available for PhD students, as well as three-week systems analysis courses for supervisors, postdocs, and researchers. “SASAC takes advantage of its partnership with IIASA while localising systems analysis from the South African and regional perspective,” says Hachigonta. 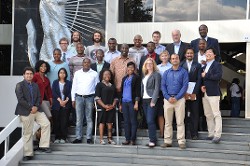 According to Priscilla Mensah, Director of Human and Infrastructure Capacity Development at the NRF, this perspective includes “focussing on students at the doctoral level and strengthening links between researchers in South Africa and at IIASA.” Mensah describes the three years of the SA-YSSP as a “critical experiment” and says SASAC is “an improved model with a lot of momentum.” The NRF funds South African researchers to travel to IIASA, but the hosting of IIASA researchers is limited by resources–a situation Mensah would like to change. She is keen to point to the issues students and researchers will be tackling, such as energy, water, and acid mine drainage. “These challenges are relevant to South Africa, the region, and the continent,” she says.

South Africa’s dramatic cultural, social, and environmental diversity, combined with democratic youthfulness, provides plenty of scope for systems analysis. No wonder PhD student Sandile Ngcamphalala is fired up about the potential. With a SASAC research scholarship, his PhD focuses on “water policy monitoring and evaluation to improve water policy performance in the face of uncertainty.” He believes systems research is “central to the future of South African policy making and strategic thinking on sustainable development.” Sandile wants “bigger picture thinking” and is excited by the opportunity of his SASAC scholarship. He would like to see the SASAC-IIASA partnership strengthened through exchange visits, information sharing, and training. Also on his wish list: “A greater focus on systems research.”

At the University of the Witwatersrand in Johannesburg, Professor Mary Scholes holds a research chair in systems analysis and teaches postgraduate students in systems analysis and global change. As director of postgraduate studies, she has worked closely on the transition from the SA-YSSP to the now three-year-old SASAC. She describes some of the thinking behind its creation: “It had to overlap with South Africa’s national priorities and actively address the legacy of apartheid.” A selection system ensures that students chosen for SASAC programs reflect South Africa’s diversity. Selection is carried out by the NRF, while scholars like Scholes deliver what she calls “a pipeline of competence” in systems analysis. The program is in its third year and currently has 60 PhD students. “Not only do we have the students, but we have the supervisors who also benefit by being part of the program,” says Scholes. South African and international experts participate in different elements of the course.

Is the South African model sustainable and transferable? 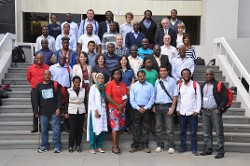 For Mary Scholes the answer is a definite yes. She believes the key criteria are intellectual rigour and administrative efficiency combined with links to IIASA. “There’s a real benefit as IIASA scientists are research oriented and not as torn and distracted as South Africans who have to teach, do community service, and research,” says Scholes. Priscilla Mensah from the NRF is also confident that other countries could copy the model: “I think there was some nervousness at the beginning, but after three years (under the SA-YSSP) it was evident that this model can be replicated elsewhere.”

As South Africa’s model of systems analysis capacity development has changed, so has its relationship with IIASA. Ulf Dieckmann co-chairs capacity development and academic training for IIASA and closely accompanied the transition from the SA-YSSP to SASAC. “Ideally, the holistic and cross-sectoral systems approach at IIASA can enable South Africa’s young democracy to home in on sustainable technological, environmental, and institutional solutions that took much longer to emerge elsewhere,” says Dieckmann. He describes the persistent commitment from the South African government as “exceptional” and is looking forward to “an even better dovetailing of IIASA contributions and the needs of South Africa and southern African institutions.”

How Systems Analysis helped my career

He tells Options: “Participation in the SA-YSSP and taking up a short-term vacancy at IIASA accelerated the completion of my doctoral degree with the University of Antwerp in Belgium. The topic of “climate change adaptation” features much systems analysis and holistic/whole-systems thinking. My participation in the SA-YSSP and IIASA has instilled a systems approach in my professional career. Having both on my CV will bring benefits.”