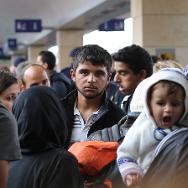 In the summer of 2015, IIASA researchers living in Vienna had a front-row seat to a wave of refugees entering Europe from war-torn Syria and other regions including Africa and the Middle East. The train station where IIASA scientists catch the bus to work, was packed with people in transit. People stood in long ticket lines wrapping through the central hall for hours on end. Families slept on cots in a makeshift shelter and shared meals sitting on the station floor.

For IIASA demographers, migration is one of the key variables in their work. Yet, for researchers who often work on a highly theoretical plane, the scene at the Vienna train station was a reminder of just how relevant their work can be—and a harbinger of how great the demand would soon become for science-based models of future migration.

“Migration is one of the three basic components of demographic change,” explains IIASA World Population Program director Wolfgang Lutz, who is also the founding director of the Wittgenstein Centre for Demography and Global Human Capital. “Other than fertility—birth rates, and mortality—death rates, migration is the only way the size of a country’s population can change.”

An urgent need from EU policymakers

Since the summer of 2015, migration has become an increasingly divisive issue across Europe. Some argue that refugees bring problems such as crime and terrorism, or that they can’t integrate well because of their different religions, languages, or education levels. Others argue that Europe actually needs more migration in order to shore up its social system, as declining fertility and longer lifespans have led to a greater proportion of older people in the population.

Despite these popular but contradictory narratives, there is actually very little systematic analysis for projecting how migration will develop and what its impacts will be on Europe’s labor force and society, says Lutz. That is why in 2016, EU policymakers turned to IIASA to launch a new partnership for migration research. The Center of Expertise on Population and Human Migration (CEPAM) includes five researchers at IIASA and five at the European Union’s Joint Research Centre (JRC), who are conducting applied research that provides timely answers for policymakers’ urgent questions.

“What we’re trying to do is look at the big picture and the long term. We are looking at the drivers of migration–what we call pull factors that entice people towards a new country, and push factors that drive people to leave their homes,” says Lutz, who is leading the partnership. The plan is to produce a set of scenarios that can show the potential impacts of different immigration policies, allowing policymakers to make educated decisions and smarter plans.

Although only in its second year, the partnership has already produced several insights and new methods that could provide a more scientific basis for policymaking. At the core of these efforts are IIASA’s population projections, which were updated this year to include data up to 2015 and published in a new book in the context of CEPAM. These multidimensional projections include not only age and sex, but also education levels, labor participation, and other factors that play a huge role in migration dynamics. In April 2018, Lutz and colleagues presented the updated projections to policymakers in Brussels, along with initial findings from the initiative.

Estimated global migration flows by gender 2010-15 While global migration flows have been assumed to increase over time, a recent study by IIASA researcher Guy Abel estimates that in fact, the proportion of the global population that migrates has remained steady at 0.65% of the global population over each five-year period since the 1960s. (Abel G, 2017)

Does the EU need migrants?

Initial migration scenarios developed through the partnership highlight that the EU’s future labor force depends not only on migration, but also on the proportion of people working. While it is true that Europe’s population is growing older on average, women and people over the age of 65 have been becoming increasingly active in the European labor market in recent years, coinciding with higher rates of education. The research finds that at current rates of labor force participation, the labor force size would indeed decline substantially until 2060. However, if women were to work across the EU at rates common in Sweden, the decline would be much smaller, and could be shored up by a moderate rate of migration.

Lutz notes that other factors could also drive changes in labor force participation, for example increasing automation that could reduce the need for unskilled workers, while potentially increasing the need for more educated workers. 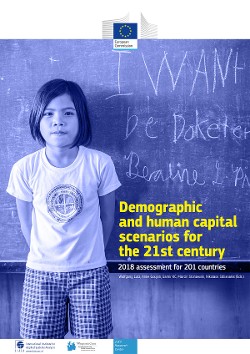 Such a detailed view of a subset of the population—a method known as microsimulation—could help answer trickier questions, such as how well immigrants might be able to adjust to their new countries, learn the language, find jobs, and effectively integrate into society. It could also be used to help assess the effectiveness of such policies.

Alain Bélanger—a former participant in the IIASA Young Scientists Summer Program—rejoined IIASA in 2016 to develop a microsimulation model that could take into account more of the complexities and dynamics of multiple, highly diverse population groups. He says, “The macro-level approach cannot be used to model the complexities and dynamics of super-diverse populations because it has practical limits in the number of events, states, and groups that it can model.”

While the project focuses on Europe-specific scenarios, the research takes into account the broader context of worldwide drivers of migration. For example, Lutz notes that population growth in Africa will be a key driver defining how strong future migration will be from the continent. Climate change, which can contribute to conflicts, food insecurity, or other challenges, may be another indirect driver of migration, and IIASA researchers are exploring this aspect as well.

This big-picture view is a key reason that the IIASA World Population Program was perfectly placed to step in when the EU needed assistance. As their models become more detailed, IIASA demographers hope their research will help policymakers gain a better understanding of the people they are working to help.

Lutz W & Belanger A (2017). Demographic change and the drivers of future migration into Europe. Approach, methodology and work plan of the JRC/IIASA Centre of Expertise on Population and Migration. IIASA Report. Laxenburg, Austria.

Demographic scenarios for the EU: Investigating the role of migration