What is disaster resilience?

Options Summer 2017: True disaster resilience is not just about reducing risk, it must also have sustainable development at its core. 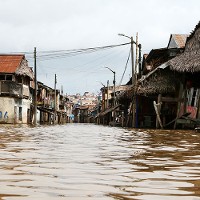 In July last year a flood hit the Indian state of Assam, affecting 1.6 million people as they fled, abandoning homes and livestock. In October, a hurricane struck Haiti, affecting 2.1 million people and leaving 806,000 in urgent need of food. In Peru, February this year saw the worst floods in two decades, killing over 100 people and displacing nearly 158,000. Hospitals, roads, and schools were all severely affected.

Whatever their origin, disasters hit the poorest and most vulnerable communities the hardest. The loss of property and infrastructure is often just the start of a vicious cycle of poverty. “Let’s say your town is hit by a hurricane,” says IIASA researcher Adriana Keating. “The school is damaged, and your kids’ education suffers. Your house was blown down too, and you have to take out a high-interest loan to rebuild it. It’s hard to recover from that: people struggle along in debt, children never get that education back. And what happens when the next storm comes along?”

Keating and colleagues in the IIASA Risk and Resilience program are exploring how to break this cycle, how communities can not only face disasters but continue to work towards their sustainable development goals despite them. This process starts, says Keating, with understanding what disaster resilience is, and what it isn’t.

In a recent study the team found that traditional definitions of disaster resilience focus on reducing risks. That is important, but it needs to be extended. The risks are always going to be there, and in many cases will even worsen under climate change. “Resilience is not
just disaster risk management done well,” says Keating. “It’s living in harmony with disasters, it’s thriving in the face of them.”

Developing real disaster resilience means linking it with sustainable development and
shifting the focus to community wellbeing. “We must also accept that risk is constructed by humans,” adds Keating. “If a typhoon hits a deserted island it’s not a disaster; it’s only ever a disaster if people and their property are in the way. That also means we have some power to prevent new risks—by avoiding construction on flood plains, for instance.”

Making disaster resilience a part of sustainable development and vice versa ensures that the two reinforce rather than undermine each other. Building homes on a fault line or flood plain might look like the best option for economic development—and it could be, in the short term—but risk and resilience analysis will show that it puts communities into harm’s way. Getting schools running in the aftermath of a disaster is not only an important part of sustainable development, it also improves disaster resilience for the future.

Putting these principles into action in Peru, IIASA researchers and the nongovernmental organization Practical Action brought together members of vulnerable communities and other stakeholders to explore the links between sustainable development and flooding. “A greater focus on long-term flood risk management in land-use planning and governance is vital to breaking the cycle of disaster impacts that undermines development in the region,” says IIASA researcher Adam French, who spearheaded the Peru collaboration.

The role of risk perception in decision-making processes