Options Magazine Winter 2016: Taking all we can get, as fast as we can get it, will end in tragedy for all—building resolutions based on all voices, as clumsy as that may be, might be our best hope. 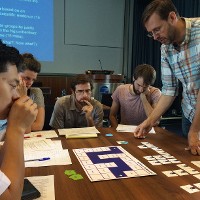 The tragedy of the commons is a tragedy indeed. Individuals—when acting only in their own interests—use resources at an unsustainable rate, and once they are gone, everyone is poorer for it. Humanity is acting out the largest-ever tragedy of the commons now, in the form of climate change, mass extinction, and resource depletion all over the globe.

Understanding how we can move away from a world where individual people or countries plow ahead with only their short-term, self-centered goals in sight is a key aim for the Equitable Governance of Common Goods Project. This interdisciplinary endeavor draws on expertise from across IIASA, exploring how worldviews affect behavior and shape social dynamics. Developing synergies between cultural theory and game theory, the research elucidates how top-down regulations can be improved by integrative assessments of stakeholder conflicts and by scaling up the successful characteristics of self-organized bottom-up governance.

Policymaking is a messy business. Different interests, timeframes, and values must be balanced, a fickle electorate must be satisfied. It seems logical that the overall aim would be the simplest path to the most efficient solution, but this is not necessarily true. Clumsy solutions are known as such because they involve hearing and responding to all worldviews (see figure 1)—almost never a streamlined process. 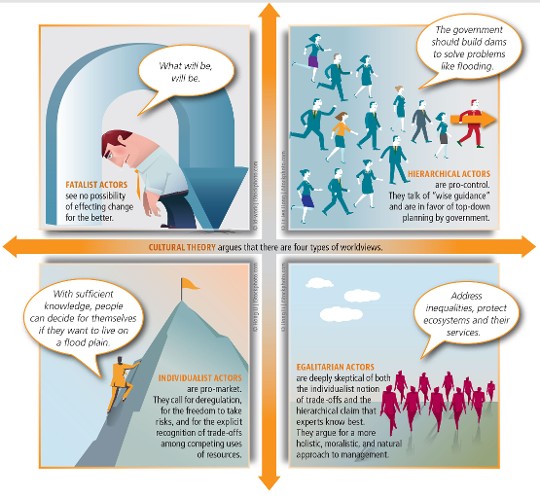 “Policies are often formulated within one worldview. If you use the lens of that worldview, you see a simple, fit-for-purpose solution. Elegant, in fact,” says IIASA Risk and Resilience Program Director JoAnne Linnerooth-Bayer. Groups with different worldviews will define the problem differently, and then find a solution that matches their definition. “Their solutions look perfect, if that’s how you frame the problem,” she says. “So we end up with different solutions that are all ‘perfect’.”

A clumsy solution is one that all groups can more or less agree with. It is not perfect in anyone’s eyes, and it might even look a little clumsy because it is botched together from different frames. But importantly, IIASA research has also shown that the clumsy solutions are the successful ones. Analysis has demonstrated that clumsy policies— those that involve all voices to reach a negotiated compromise—were the robust ones; others had so much opposition that often they were not implemented, or did not last.

It is crucial that researchers providing advice to policymakers understand the value of the clumsy approach. “We are not very good at this, we analysts,” says Linnerooth-Bayer. “We tend to formulate elegant solutions and then wonder why our recommendations weren’t followed, and we forget that we have worldviews too.”

To give researchers and policymakers experience of clumsiness, Linnerooth-Bayer and colleague Piotr Magnuszewski developed a flood risk game. Players are arranged into groups and asked to make the case for different flood management solutions based on different worldviews. Ultimately, however, they have to arrive at a single solution when the time is up, no matter how disparate their views. The frustrations that arise and compromises that are needed give the players important insights into how such a process works in the real world.

The importance of communication and different worldviews is also evident in other work done in as part of the Equitable Governance of Common Goods Project (Box 1), which combines insights from cultural theory and game theory.

To investigate the conditions that will prompt a tragedy of the commons, the project team developed a forest management computer game. Researchers tasked groups of five students with managing a single forest through a number of rounds. In each round, they could harvest as many trees as they liked, and were given a financial reward for each tree at the end. However, they had to bear in mind that after a round was over the forest had to regrow, and the amount of regrowth was dependent on the number of trees left.

A deciding factor in whether the game dissolved into a tragedy of the commons was communication. When players could not communicate, the forest was clear-felled, with all players harvesting as many trees as quickly as possible, resulting in slow regrowth and low returns for all. However, when allowed to communicate, players generally agreed that they would leave some trees, speeding up regrowth and increasing profit.

The team also explored the importance of different worldviews in this game. Using a questionnaire, they calculated a score for each team based on how their responses matched the four worldviews. The results showed that the higher their egalitarian score, the better the group managed the forest and the higher their yield and profit. Individualistic and hierarchical scores were negatively correlated with yield. “It is not a strong effect, but the tendency is there in exactly the direction that cultural theory would predict,” says IIASA researcher Peter Bednarik, who co-developed the game. “We hope to add forest management policies that fit within different worldviews: privatizing the forests would be individualistic, for instance, whereas a hierarchical policy would impose top-down harvest limits.”