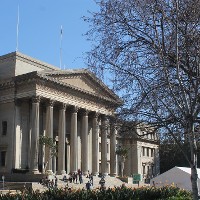 Junko Mochizuki
(RISK program) and Sebastien Poledna (RISK and ASA programs) gave talks at the SASAC Emerging Researchers’ Program, a High-level Systems Analysis Capacity Strengthening 3-week Programme, held this year at the Universities of the Witwatersrand (Johannesburg) and Limpopo (Polokwane), South Africa. The program consisted of lectures, seminars, and workshops covering themes in the social and natural sciences, including policy dimensions. It was targeted at early-career researchers and aimed to expose participants to experts in systems analysis.

Junko Mochizuki gave a talk titled “Systems analysis of risk – what do we analyze when we analyze risk?” Her talk provided an introductory overview of various risk theories, mainly coming from environmental risk perceptions and anthropological literature on world views that are relevant to understanding climate change risks. Her key message was that scientists need to understand not only how to quantify risk (in terms of knowing how to crunch numbers and to estimate the probability of harm) but also how different stakeholders who receive risk information interpret that information.

The 3-week successful event was implemented by a consortium of four universities, namely the University of the Western Cape, the Universities of Limpopo and the Witwatersrand, and Stellenbosch University and was funded by the Department of Science and Technology through the National Research Foundation of South Africa.