About 500 million people live in cities in Europe, most of which are critically vulnerable to extreme weather events, as illustrated by the severe flooding that has occurred in different parts of Europe over the last two decades.

Pluvial floods occur when heavy rainfall exceeds the capacity of a city’s drainage system. Due to their fast onset and localized nature, such floods cause significant damage to urban environments. They are also difficult to manage. Reliable urban flood forecasting and early warning services play a crucial role in reducing such impacts. The monitoring and management of city flooding events are often in the hands of local government agencies, however, with citizens playing a passive role.

The aim of the FloodCitiSense project was to develop an urban pluvial flood early warning service that actively involved citizens through a crowdsourcing component, i.e., reporting of pluvial floods and rainfall events using mobile and web technology and deployment of low-cost rainfall sensors in their gardens. Although the project is now finished, IIASA and FloodCitiSense partner RAIN++ are continuing to support the FloodCitiSense mobile and web apps while some low-cost rainfall sensors are still recording rainfall.

The FloodCitiSense mobile app asks volunteers to report the occurrence of a flood event happening on the ground, documenting it with photographs or videos. We also ask users to report on the intensity of rainfall at the time of the event. The data can then be uploaded to the server when the user has an internet connection, after which the data can be viewed by others in the mobile app or the web application. Examples from the mobile app are shown below. 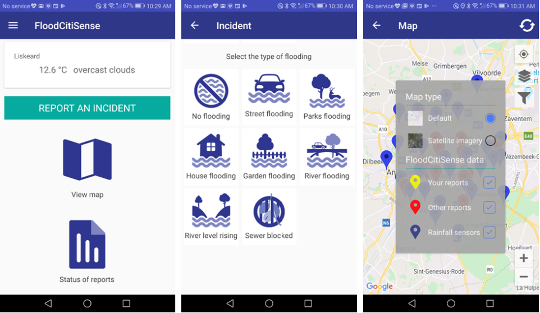 The web application allows users to view the rainfall data from the low-cost sensors as well as rainfall coming in from official weather and environmental monitoring agencies. Flood and rainfall reports can also be viewed online, and users can create flood reports in the web application, uploading their photographs or videos to the location of the flooding on the map.

The web application was also designed to demonstrate what an early warning system could look like, showing the probability of pluvial flooding in areas of the city of Brussels based on a historical event. To see this demonstration, click on the Early Warning System tab in the web app.

The FloodCitiSense mobile and web apps were funded by the Joint Programming Initiative (JPI) for Urban Europe ERA-NET co-fund Smart Urban Futures (ENSUF). The co-funding for Austria was provided by the Austrian Research Promotion Agency (FFG).