LACO-Wiki is an online land cover and land use validation tool, openly available for anyone to use, which simplifies the process of validating remotely sensed map products. 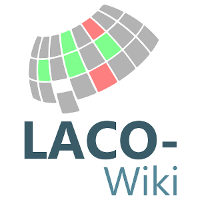 Such methods can also be used to produce area estimates, e.g., how much forest cover exists in a country or region? Although the validation methods are well documented, e.g., in Olofsson et al. (2014), their application requires considerable expertise.

In step one, users upload a raster or vector map for validation. In step two, they create a validation sample, which can be random, stratified random or systematic. In step three, they carry out the validation by interpreting the samples using satellite imagery from Google Maps, Microsoft Bing and/or Sentinel-2 (or users can supply their own imagery via a Web Map Service). Finally, in step four, the system calculates a confusion matrix and provides accuracy statistics as a report or as raw data for downloading. 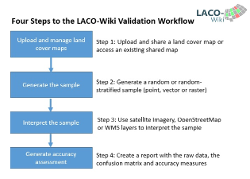 The tool is aimed at a variety of users from researchers and students to map producers and the Earth Observation industry. In addition to land cover and land use validation, the vision behind LACO-Wiki is to become an open access repository for calibration and validation data that can be used by the land monitoring community to improve future land cover products. Users can now access the validation database through an API (Application Programming Interface), which is available once users have logged into the system.

Funded by the Austrian Research Promotion Agency (FFG), the first version of LACO-Wiki was released in 2016. Since then, further developments have been funded by the European Environment Agency to support the use of LACO-Wiki by EEA member states in validating Copernicus Land Monitoring Service products, in particular, the High Resolution Layers. The API to access the validation database has been funded by the European Space Agency in the World Cereals project.