The World Population Program (POP) addresses the changing structures of human populations in the context of sustainable development: the changing number of human beings on this planet, with a specific focus on the changing composition by age, gender, level of education, place of residence, and other important human characteristics. 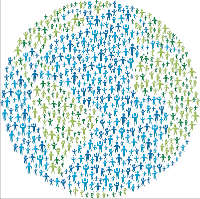 The World Population Program (POP) also tries to comprehensively assess the social, economic and environmental drivers of population changes, as well as their implications for long term sustainable development.

POP has continued its strong strategic alliance with the Vienna Institute of Demography of the Austrian Academy of Sciences (VID) and the Vienna University of Economics and Business (WU). The resulting Wittgenstein Centre for Demography and Global Human Capital emphasizes modeling of the dynamics of human capital formation, including reconstruction of historical data and projections for the coming decades for most of the world’s countries.

In 2013, POP has enhanced its scientific collaboration across programs, organization of efforts along the three dimensions of the Institute's strategic research areas, and dissemination of IIASA’s scientific output to policymakers and civil society.