Modeling soil carbon and nitrogen cycling based on microbial ecology

Christina Kaiser is working in the Evolution and Ecology Program using a computer model that she developed and tested herself which simulates decomposing litter or soil at microbial-relevant scales to understand mechanisms emerging from complex microbial interactions at the microscale. 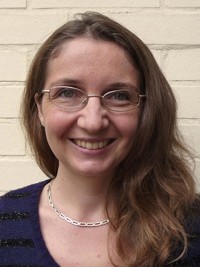 Microbial decomposers in the soil are responsible for the largest flux of CO2 from terrestrial ecosystems to the atmosphere. Soil microbial activity is usually investigated at the bulk soil level, both in empirical and in modeling studies, which makes it impossible to understand mechanisms emerging from complex microbial interactions at the microscale. In past years I developed and tested an individual-based computer model, which simulates decomposing litter or soil at microbial-relevant scales (µm). With this model, we showed that:

Plants share a considerable amount of the carbon (C) that they gain by photosynthesis with soil microbes in the form of root exudates, release of allelopathic substances or direct mutualistic investments. The amount and composition of this plant belowground “investment” shapes the composition of the local soil microbial community, which in turn feeds back on the fitness of the host plant and its neighboring plants. A better understanding of this below-ground feedback on plant health and community dynamics is necessary to assess the full consequences and potentials of human manipulations in agricultural settings, which potentially alter plant below-ground carbon release (i.e., selection for specific plant genotypes, herbicides).

Within the SA-YSSP 2014-15, as a Postdoctoral associate for the Research Theme 8 (Students: Hung-Yu Chaun, Anette Alleman, Supervisors: Gergely Boza, Ulf Dieckmann, Wijnand Swart), I participated in the joint development of a model on plant-microbe interactions which links quantity and quality of root exudations to soil microbial community dynamics and its feedback to plant performance.

[2] Kaiser C, Richter A, Franklin O & Dieckmann U. Social interactions among microbes at the microscale drive large-scale carbon and nitrogen dynamics in soil (in revision).

Christina Kaiser is an Austrian citizen, she was previously part of the IIASA postdoctoral program, and is now a Postdoctoral Scholar in the Evolution and Ecology Program.