The Energy (ENE) Program made important strides in advancing the state of knowledge on energy poverty, the policy costs of expanding universal access to modern energy worldwide, and the synergies and tradeoffs between achieving universal access and other sustainable development goals. 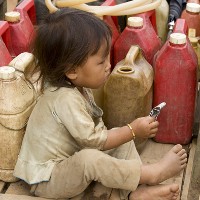 During the first half of the year, ENE co-organized a workshop in Kenya with the Stockholm Environment Institute, which focused on whether low-carbon options change conditions for expanding energy access in Africa. A background note prepared for the workshop along with the workshop findings, published in the form of a discussion brief, were used as inputs to the New Climate Economy report chaired by former President of Mexico, Felipe Calderón.

For the first time, the state of energy poverty in three Central American countries – Nicaragua, Guatemala, and Honduras – was assessed, and policy costs to eradicate energy poverty were estimated using an application of the MESSAGE-Access model. This analysis, which was conducted for the World Bank, was synthesized in a policy report, which will be circulated among policymakers and stakeholders in the three countries.

Scholars published an article in Nature Climate Change on the impact of historical electrification in India on greenhouse gases [1]. Other research on the multiple dimensions of kerosene use for lighting in India, conducted collaboratively with a former Young Scientists Summer Program participant,has beeb submitted to the journal Environmental Research Letters.

The Energy Program also broadened understanding of energy poverty as a constraint on raising basic living standards. Scholars published a piece in Nature Climate Change on the potential impacts of poverty eradication on greenhouse gas emissions [2]. Based on the work of a YSSP scholar in summer 2014, a paper was also submitted (and accepted in 2015) to Global Environmental Change that quantified the development needs of Africa, South Asia and Central Planned Asia in energy terms, and discussed the implications for greenhouse gas emissions [3].

Researchers in the group were also part of a collaborative study to examine globally the drivers of and trends in energy (and other) infrastructure access. This study is being submitted to the academic journal World Development.

Narasimha Rao won the prestigious European Research Council (ERC) Starting Grant for 3 years to quantify the energy required by select developing countries to provide decent living standards to all. The results of this research can inform ongoing international policy efforts to define targets for energy among the Sustainable Development Goals (SDGs). This project will enable the group to expand its resources and expertise into new areas of overlap between energy and poverty [4].

[4] Lamb, W., & ND Rao (2015). Human development in a climate-constrained world: what the past tells us about the future, Global Environmental Change (in press).

Analyzing the Energy Dimensions of Poverty

Poverty eradication and climate change: Is there a conflict?