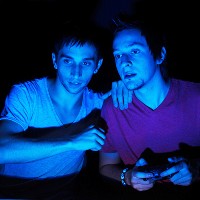 In 2014 ASA researchers published the results of data analysis from a massive on-line multi-player game Pardus; the data contained complete information on the social network of players, as well as their features.

Studying human behavior in virtual environments provides extraordinary opportunities for a quantitative analysis of social phenomena with levels of accuracy that approach those of the natural sciences. Researchers investigated the data set and found that the social network involved in the game had a hierarchically three-layered nested structure which appears to be very typical for human societies in general, given that it was found in hunter-gatherer societies [1] [2].

In the latter, a special algorithm, named the “generalized K-core algorithm,” was developed to identify so called “elite” subgroups in a social network, that is, subgroups of individuals with the ability and means to influence, lead, govern, and shape societies. It was revealed that members of elites are not only well-connected individuals (who can naturally impose their influence on many and quickly gather, process, and spread information), but also intermediaries connecting hubs to form a cohesive and structured elite subgroup at the core of a social network. Having found that the wealth distribution of players to be similar to that of Western countries, researchers investigated the relations between wealth of individuals and their local network positions [3]. This revealed that wealthier people have a higher degree of connections and lower clustering coefficients, while their nearest neighbors have relatively lower degrees of connections; individuals not organized within social groups are significantly poorer on average. Gender- and age-related differences in the behavior of individuals were studied by [4]. It was found that while males and females act similarly when performing positive actions, females are slightly faster for negative actions; more experienced (i.e., older) players are generally faster at making decisions about engaging in and terminating enmity and friendship.

Researchers studied the data set containing information on all Austrian patients suffering from diabetes in order to reveal determinants of diabetes; they found evidence of a negative impact of malnutrition during early life on metabolism in older age [5].