Network dynamics and contagion effects in natural and human systems

Advanced Systems Analysis (ASA) Program researchers develop dynamic network models of ecological, economic, and social systems. There is a particular focus on the issue of financial systemic risk and cascading failures in the inter-bank lending network. 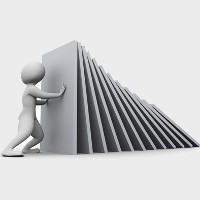 ASA develops approaches to assessing and managing systemic risk in ecological, economic, and social systems. As contemporary global systems are increasingly interdependent, they are confronted with systemic risks posed by the actions and interactions of individual actors. Although these individual forces are potentially small, they can be the catalysis for significant impacts; this gives rise to the notion of “femtorisks” [1].

ASA researchers developed an agent-based model, the CRISIS macroeconomic model in which firms pay households wages or dividends, and households consume goods produced by the firms; both firms and households make deposits at the banks; the banks grant loans to the firms [2]. Occasional lower demand for commercial goods and higher unemployment, however, may cause commercial loan defaults, which in some cases leads to bank defaults: as other banks connected to a defaulting bank via an interbank loan network may default as well, the risk of defaulting becomes an emergent phenomenon in the CRISIS model. Researchers [3] used the CRISIS model to study the economic performance of three different crisis resolution mechanisms, which have played a pivotal role in the resolution of banking crises in the recent past. There was also an examination [4] of different leverage regulation policies; one of the findings was that when leverage is low, regulation policies help reduce the risk of default, but when leverage is high, the default risk is lower in the absence of regulation. Using the CRISIS model researchers [5] experimented with policies that would make agents self-organize and restructure the financial network in order to reduce systemic risk. They found that a systemic risk tax could be introduced proportionally to the marginal contribution of individual transactions to the systemic risk of the entire system. This would reduce the system’s systemic risk practically to zero.

Researchers [6] demonstrated a case study examining the robustness of food webs; for the South African Mdloti estuary, they simulated the effect of some anthropogenic stresses (eutrophication, overfishing) on its species using Ecopath software and quantified the changes in total energy throughflow and other ecological indicators for each stress scenario.

Other researchers [7] suggested a simple diffusion model to understand the spread of human diseases in a population and to study co-morbidities. It showed that patients predominantly develop diseases that are in close network proximity to disorders that they already suffer from. The model was calibrated based on medical claims data for the entire population of Austria and can be used to anticipate age-dependent disease profiles for entire populations, and also to design and validate prevention strategies.

[6] Chmiel A, Klimek P, Thurner S (2014). Spreading of diseases through comorbidity networks across life and gender. New Journal of Physics, 16:115013