Julio Enrique Herrera Estrada, of Princeton University, USA, used different models and climate scenarios to investigate the impacts of droughts and heatwaves on water resources, energy production, and food security, as well as the interactions between them. 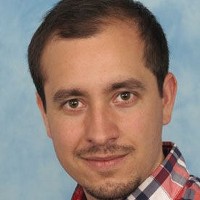 Droughts are one of the most costly natural disasters, causing impacts on water availability for agriculture, human consumption, energy generation, and the healthy maintenance of ecosystems. It is thus important to understand the behavior of droughts and the mechanisms behind them in order to forecast them better, and also to have more accurate projections on how they may be affected by climate change. However, most studies on the subject do not address the simultaneous evolution of droughts in time and space. They focus on time series analysis of area-averaged quantities or on the spatial heterogeneity of a drought of a given duration. Therefore, this research consists of characterizing the spatio-temporal dynamics of drought around the world during the past 30 years, identifying patterns of motion and behavior.

Soil moisture data from the Climate Forecast System Reanalysis (CFSR) at a monthly time scale was analyzed to identify anomalously dry regions at each time step. Data values were replaced by their respective percentiles and drought was defined when a percentile value was below a given fixed threshold. Regions under drought were aggregated into clusters at each time step by a proximity criterion, and their continuity through time was tracked. Different cluster characteristics were studied, including the distributions of their duration, total distance traveled by the centroids and distance between their start and end locations, and rates of change in area and intensity.

Studying the drought cluster tracks showed that there are “hotspots” where more clusters pass through. These match with the semi-arid regions of the world. Some regions also exhibit consistent patterns of displacement for droughts that pass through them. Both the hotspots and the displacement patterns were found to be seasonally dependent. The rates of change in area and intensity were found to be non-linear functions of the clusters’ area and intensity in a given time step. Finally, different parameterized distributions were fitted to the distributions of the clusters’ properties. The parameters varied more with the threshold of drought chosen than with the continent where the droughts were studied.

Drought clusters are dynamic and can travel long distances, sometimes across continents, evolving along the way. The size and intensity of a drought impacts its future evolution, with smaller droughts experiencing larger relative area changes than larger ones. The cluster characteristics follow common distributions, allowing us to do comparisons between regions and study the sensitivity of the threshold definition.

Julio Enrique Herrera Estrada, of Princeton University, USA, is a citizen of Mexico. He was self-funded and worked in the Water Program during the YSSP.