To REDD or not to REDD?

Maria Rivera, of the University of Maryland, USA, used a comprehensive review to examine whether REDD+ is the best policy instrument for the Virunga Park in the Democratic Republic of Congo. 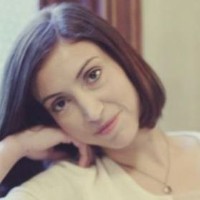 In the 2007 Intergovernmental Panel on Climate Change (IPCC) report, scientists estimated that forestry accounted for about 17% of global anthropogenic greenhouse gases (GHGs) emissions released in the atmosphere—ranking third in total emissions after energy supply and more than what the global transportation sector contributes to the problem. Reducing emissions from deforestation and degradation (REDD+) was introduced as a cost-mitigation strategy to reduce global GHG emissions by curbing deforestation and forest degradation within developing countries using reference emission levels agreed upon during COP-13 in the 2007 Bali Action Plan. By exposing the potential risks associated with implementing REDD+, this paper hopes to shed light on alternative forms of community-based natural resource management that are financially sustainable in the long run and apply these insights to the context of the Virunga Park in the Democratic Republic of Congo (DRC). Using the cultural theory of plural rationalities as a lens from which to take a critical look at REDD+, this paper aims to highlight areas for improvement by first asking the question whether it is an adequate policy mechanism to attain long-term financial sustainability and achieve the multiple goals of carbon sequestration, protection of high conservation value forests and its biodiversity and equitable economic development for the affected communities.

After a comprehensive review of REDD+ literature, 10 case studies of successful community-based natural resource management projects in Botswana, the DRC, Kenya, Madagascar, Namibia, Nepal, Uganda, and Zimbabwe were used to highlight best practices and glean lessons learned that could serve as models for the Virunga Park in the DRC.

The assessment from the literature review and according to cultural theory is that REDD+ as a policy solution to address the threat from Soco the British oil company—which, with the permission of the Ministry of Conservation, Nature and Tourism owns permits to explore and drill on 85% of the Park including Lake Edward—is not appropriate for the Virunga Park because it is flawed, hegemonic, and exclusionist. While REDD+ is a good policy for carbon capture (its ultimate goal), it is hierarchical and in areas of contested land tenure it reverses progress made toward registration of community land titles. 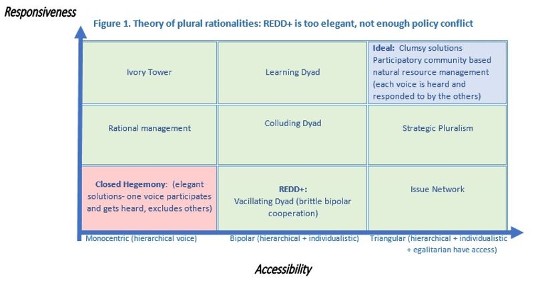 By analyzing REDD+ within the context of Robert Dahl’s cultural theory dualistic dichotomy of closed hegemony versus pluralist democracy and refining it further by placing it in one square province of Steve Ney’s refurbished 3 x 3 matrix adaptation of policy subsystems, we can see in Figure 1 that REDD+ falls short of the pluralist, “clumsy institution” ideal. Because in many cases it allows for participation and responsiveness by governments but only participation but not responsiveness by individual market actors and excludes other social solidarities, REDD+ is still too elegant a solution, hovering in the vacillating dyad square. In some instances it could fall under the colluding dyad square as investment contracts are negotiated between investors and states while local communities and forest-dwelling people do not play a role in the negotiation process. A multiple voices approach following the principle of participation and ‘procedural rights’ in the process of decision-making as well as the right to information and ‘access to justice’ could be the right way to reform a policy mechanism such as REDD+. Because investment contracts are highly exclusionary, an international agreement on REDD+ should include provisions for seeking active involvement and input of local communities in the negotiation process.

Maria Rivera, of the University of Maryland, USA, is a citizen of the USA and was funded by the IIASA US National Member Organization during the SA-YSSP.