Thi Luu of Kiel University, Germany, empirically analyzed the structure of the Spanish credit network, the temporal changes in it, and the systemic risk of overlapping portfolios. 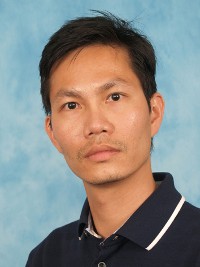 Much of the analysis of economic and financial links has focused on the study of the one-mode network (e.g., the interbank network, the production network). Here we look at a bipartite structure, a credit network between two different modes representing two different sectors, namely, banks and non-financial firms. Particular attention is paid to a unique 1997–2007 dataset from Spain. In our study, the structure of the Spanish credit network, the temporal changes in it, and the systemic risk of overlapping portfolios, are empirically analyzed using the following tools: method of reflections, network analysis, and eigenvalue analysis.

First, we use the method of reflections [1] to investigate the original bipartite structure of the network. We focus on the diversification in bank lending contracts, the ubiquity of borrowers, and the recursive effects between the banking sector and the firm sector. The key advantage of this method is that we do not have to use the projections of the original bipartite network. We take the projection matrices of overlapping loans between banks and between firms, and analyze the network structure of those matrices. Although we turn off the internal links within each mode (i.e., we do not consider the interbank network or production network in our study), credit relations act as an alternative channel of contagion and indirect links. For instance, a defaulting firm may impact all co-financing banks. Similarly, a lender with a liquidity problem may in turn see its borrowers negatively impacted. Last but not least, to detect the principal components of the Spanish credit market, we analyze the leading eigenvalues of bank–bank projection matrices and their corresponding eigenvectors [2]. From this, we calculate the eigenvector centrality indices, the main components in eigenvectors, and the corresponding ranks of banks for each year. We also investigate temporal change in the main components over the years to detect credit market evolution from the side of the banks.

Using the tools of method of reflections and recursive analysis between banks and firms, we found a gradual change in the credit relations between banks and firms from 1997 to 2007. The diversification of banks and ubiquity of firms are equivalent to the number of banks and firms, respectively. A majority of firms have fewer than three lenders, and the maximum number of loans issued by one bank is ten. In contrast, the degree of distribution of banks is much wider, heavy-tailed, and controlled by national laws. We also observe a positively significant dependence of the degree of bank distribution and the average degree of other banks’ loans. In addition, rapid convergence to a huge number of nodes in recursive effects analysis after a few rounds of reflections shows the danger of risk of contagion from one mode to the other, as well as from node to node in each mode.

The findings from network analysis show that the adjacency matrices of projection matrices are very dense, indicating high connectivity between banks and between firms through the original credit bipartite network. We also found the evidence for the existence of clustering and hierarchical structure in projection matrices. Big banks act as the hubs of the credit market in both bipartite and projection networks. In addition, by breaking down firms into different sectors, we obtain some dominant sectors attracting more credit from banks.

Our study contributes to gathering empirical knowledge and evidence of the structure and temporal change of a specific credit network and to comparing findings with existing findings from other countries. In addition, to our best knowledge, this is the first study detecting systemic risk of overlapping portfolios by using eigenvalue analysis. The empirical knowledge from this research direction is not only important to a better understanding of the issues of risk of contagion in the banking system and in the real economy; it is also a prerequisite for realistic models of bank-firm interrelations in the area.

Thi Luu of Kiel University, Germany, is a citizen of Vietnam. He was funded by IIASA’s German National Member Organization and worked in the Advanced Systems Analysis (ASA) Program during the YSSP.