Zepeng Sun of the Institute for Biodiversity and Ecosystem Dynamics, University of Amsterdam, Netherlands, assessed how populations in seasonal environments would need to adjust their life histories in order to cope with changing seasonal patterns in their environments. 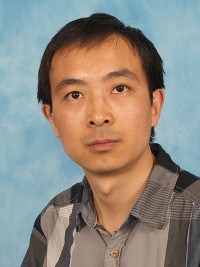 Climate change is altering the seasonal dynamics of many species. In this project we i) examined the evolution of the seasonal reproduction schedule of a consumer population in stage-structured, consumer-resource interactions in changing environments, and ii) investigated the eco-evolutionary processes through which individuals with an altered seasonal reproduction schedule can invade the resident population.

We started our project using a stage-structured, consumer-resource biomass model with one consumer population and one resource. The changing environments were modeled using the periodic growth rate of the resource. Adaptive dynamics theory was used to investigate the growth of a rare mutant in the environment established by the resident population and the Floquet theory was used as an approach to calculate the “invasion fitness,” which represents the growth rate of the rare mutant [1].

We consider two evolutionary traits: the starting point and the duration of the reproductive season of the consumer population. These two traits divide the year into a non-reproductive season, during which the adults convert all their net-biomass productivity to energy storage, and a reproductive season, during which the adults release their energy storage into offspring. On the one hand, it is disadvantageous for adults to reproduce when the resource availability is low for juveniles, as the juveniles may experience a high starvation mortality rate. On the other hand, the adults can store reproductive energy in their own bodies, which helps the juveniles avoid more severe competition for their resource. Our research shows that if all the individuals are feeding on the same resource, leading to starvation mortality in both stages in winter, then the optimal reproductive schedule would be continuous year-round reproduction. The reverse case occurs if adults and juveniles feed on two separate resources with different seasonal patterns of growth. Under such conditions, the delays would be significant enough for starvation to occur in two stages (or for starvation to occur only at the juvenile stage); evolution then results in seasonal reproduction. The latter case is usually altered by changes in climate where two resources have different levels of climate tolerance.

The evolution of the reproduction schedule of the consumer population depends on the seasonal patterns of the resources of two consumer stages, which can be driven and affected by climate changes. Our research enables us to assess how populations in seasonal environments would need to adjust their life histories in order to cope with changing seasonal patterns in their environments.

Zepeng Sun of the Institute for Biodiversity and Ecosystem Dynamics, University of Amsterdam, Netherlands, is a Chinese citizen. He was funded by IIASA’s National Member Organization of the Netherlands and worked in the Evolution and Ecology (EEP) Program during the YSSP.