Gergely Boza of the Evolution and Ecology Program is researching best plant investment strategy, or best cultivar, with the optimal balance between investment in allelochemical production and growth, in combination with different agricultural techniques such as monocropping, rotational cropping, or alternate cropping. 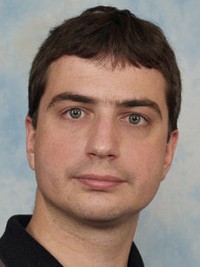 Soil microbes inhabiting the rhizosphere of plants, including mutualistic, pathogenic, or saprophyte microorganisms, play a crucial role in determining plant fitness, productivity, and health. Their role has been highlighted both in natural ecosystems affecting the diversity and stability of communities and in agro-ecosystems directly affecting crop yields. Plants evolved multiple—positive and negative—ways of influencing the composition of these microbiomes, including various biochemical components released in the form of exudates by the plant root system.

The scope of the project is to develop and to analyze a model of above- and below-ground community dynamics coupled by direct and indirect feedback mechanisms. The model considers plants as hosts, as well as several functional groups of microorganisms inhabiting the plant root system, which are influenced not only by the release of root exudates composed of poisonous allelochemical compounds but also by beneficial mutualistic investments and general energy-rich compounds. Besides the direct effects conveyed by these chemical compounds, the model also takes into consideration indirect effects via changes in community compositions, neighborhood effects from the surrounding rhizosphere communities, or impact of anthropogenic factors such as monoculturing. The envisaged conceptual model is implemented and analyzed sequentially with increasing complexity, starting with a simple representation using differential equations, and later arriving at a spatially explicit individual-based model. The research project is divided into two projects, each focusing on a different aspect of feedback loops occurring between the communities and using different plants as models.

In the first project, the soybean is considered as the host, and the relationship between symbiotic nitrogen-fixing rhizobia and root pathogens is modeled. This project focuses more on the positive feedback effect between above- and below-ground community dynamics. While the symbiont directly benefits the plant in accordance with the received mutualistic investment from the plant, it also competes for the root area with the pathogens; moreover, infection by the symbiont decreases the infection rate of the pathogen, resulting in indirect positive effects for the plant as well. On the other hand, symbionts are very fragile and not easily retained in the soil, and as opposed to the pathogens, need anthropogenic maintenance in the form of soil inoculation. The study aims to find the optimal procedure to maintain high symbiotic and low pathogenic infection levels in soybean cultures.

The second project focuses on the role of negative influences on rhizosphere soil community dynamics, considering allelochemical-producing sorghum as model species. The model investigates the direct and indirect effects of different rates of allelochemical production in sorghum root exudates that influence saprophytes and soil-borne pathogens at different rates. While allelochemicals are an easy way to eliminate pathogens, the production of these chemicals is also costly; thus their production is in trade-off with plant growth and yield. Furthermore, allelochemicals may also influence negatively some types of saprophytes that could benefit the plant. The study aims to find the best plant investment strategy, or best cultivar, that has the optimal balance between investment in allelochemical production and growth, in combination with different agricultural techniques such as monocropping, rotational cropping, or alternate cropping.

Gergely Boza is a Hungarian citizen, he was previously part of the YSSP, and is now a Postdoctoral Scholar in the Evolution and Ecology Program.