Advanced Systems Analysis (ASA) Program researchers are developing agent-based modeling frameworks that simulate economic agents (individuals, firms, banks, and so on) and their interactions under different regulations and input scenarios. 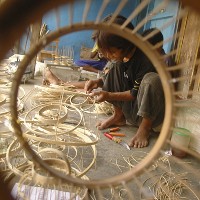 ASA researchers are developing an agent-based model of an open economy in which companies produce intermediate and final goods by employing a labor force of individuals. External shocks, for example, a sudden drop in exports of a certain sector decrease domestic production, lead to increasing unemployment and shrinking domestic demand, which in turn causes further economic decline. ASA modeling effort focuses on exploring how economic structure and consumption behavior of individuals define the propagation of the negative impact of an external shock and of how different policies can help overcome it.

In 2014 in the framework of the joint Ministry of Employment and the Economy of Finland – IIASA project "Structural Change of the Finnish Economy: A Systems Approach," customization of the modeling framework for Finland was completed and the report was submitted. In the framework of the joint Science and Technology Policy Institute of Korea – IIASA project “Agent-based Modeling for Korean Strategic Foresight,” the modeling framework was customized for Korea as a pilot version. These modeling frameworks are implemented as a user-friendly, stand-alone software allowing a user to experiment with different shock scenarios and policy parameters.

Ministry of Employment and the Economy of Finland