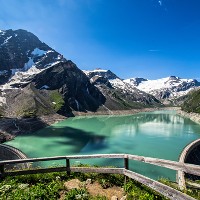 Hydropower is already pervasive in the Alps, providing about 100 TWh of power for the region. There are many potential places in the Alps for more hydropower plants. But how much would it cost to build them and the necessary infrastructure to transfer their energy to the grid? Moreover, how much would increasing hydropower capacity impact the environment and ecosystem services?

At the World Water Week in Stockholm, 31 August-5 September 2014, ESM researcher Sylvain Leduc presented – broadcast live on The Guardian - new research on the potential for hydropower in the Alps. (Video stream of session available)

Figure 1. Example of results from the BeWhere hydro model for a Business as Usual Scenario (left) and a High Carbon Tax Scenario (right), presenting the location and capacity of potential new hydro power stations calculated under cost-minimization assumptions. (click on image to enlarge).

PSI scientists were also invited to present the recharge.green project results at the 2nd Global Land Project’s Open Science Forum 2014 in Berlin, Germany, and at the IUFRO World Congress 2014, where the developed Marginal Protection Cost Curve (MPCC) approach was showcased. This indicated the increasing costs of producing renewable energy while at the same time increasing the protection of land (Figure 2), which is taken from that presentation.

Florian Kraxner was invited to present the latest recharge.green results from IIASA at the International Energy Workshop in Beijing, China.

Figure 2. Marginal Protection Curves – Concept. Biomass used for energy purposes versus biomass availability in the Alps/Vorarlberg, Austria, considering trade with (left) and without using protected areas (right). If protected areas are excluded, then at low levels of biomass availability, less biomass is used for bioenergy. If the full increment can be used, the biomass used is the same regardless of whether protected areas are in- or excluded. While the price relative to fossil-fuel-based energy is less important at lower rates of biomass availability, up to 50 PJ more biomass will be used for bioenergy if the full increment is used in response to a subsidy which makes fossil fuels 2.5 times more expensive than biomass (click on image to enlarge).

The European Academy of Bozen/Bolzano (EURAC)

International Commission for the Protection of the Alps (CIPRA)