The impact of spatial structure on evolutionary food-web formation

Jonas Wickman of Umeå University, Umeå, Sweden, studied how interaction between aspects of food webs shapes the structure and formation of food webs. 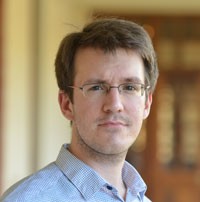 Since the concept of food webs was established, they have become one of the cornerstones of ecology. Trophic interactions, that is, species consuming and being consumed by one another, are viewed as one of the fundamental shapers of the ecosystems that make up the biosphere. Ecologists have thus spent considerable time investigating these interaction networks through data collection and collation. In principal, ecological networks can, for the purpose of analysis, be phenomenally complicated. Here, we have isolated three important aspects of food webs, namely, trophic interaction, spatial structure, and evolutionary community formation. We used mathematical and numerical modeling to study how their interaction shapes the structure and formation of the food webs.

A set of partial differential equations was drawn up describing a system of one autotrophic morph forming the base of a food web of heterotrophic morphs interacting through predation and competition, where the interactions are determined by the size of the morphs. Spatial structure is introduced by varying the resource landscape of the autotroph over space. Finally, through numerical solution of the eco-evolutionary equations, heterotrophs are allowed to evolve their size and branch into more morphs if there is niche space available, until an evolutionarily stable community is formed.

We studied the diversity (number of morphs) as well as the maximal trophic level of the evolved food-webs in relation to the variance and autocorrelation of the autotroph’s resource landscape. The most diverse communities evolved in landscapes with high variance and intermediate autocorrelation, and the highest trophic levels evolved in landscapes with high variance and intermediate, but higher, autocorrelation. These effects are the result of the formation of areas that are both large enough and well separated enough for evolutionary differentiation in both trophic interaction and spatial specialization, as well of the formation of locally highly productive areas in the system. We could determine that some effects that altered landscape variance and autocorrelation promote both spatial diversity and food webs with high trophic level, whereas other effects promote one at the expense of the other.

Jonas Wickman of Umeå University, Umeå, Sweden, is a Swedish citizen and was funded by IIASA’s Swedish National Member Organization during the SA-YSSP.