The Water (WAT) Program carried out methodological development and socioeconomic analysis for the “Integrated Analysis and Modelling of Land Use Efficiency and Security under Rapid Agricultural Transformation in China” in Chongqing, Southwest China; the work was funded by the National Nature Science Foundation of China (NSFC). 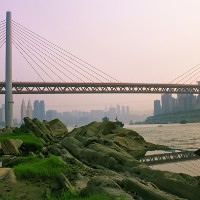 In 2014 research by the Water (WAT) Program was carried out under the NSFC-IIASA Project on Land Use Change in Mountainous Areas in China in 2014: A Chongqing case study. These activities led to considerable progresses in the modeling and analysis work on the econometric modeling assessment of the contribution of intra-village land circulation market to the reduction of farmland abandonment rates. The following are among the highlights of research undertaken in this project (see also [1] [2] [3]):

Integrated Analysis and Modeling of Land Use Efficiency in China