Ecosystems Services and Management (ESM) Program researchers are building a deforestation map with the help of players in their new Geo-Wiki game, Picture Pile. An innovative method to allow players to learn about the accuracy of their choices will also improve the quality of the data. 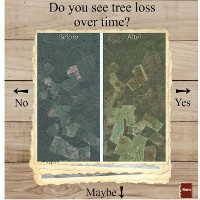 Screenshot of Picture Pile. An example of how the deforestation pile works; players see images from two different time periods and asked to determine if there is evidence of tree loss or deforestation over time.

Players of the game classify or help sort through piles of pictures which can be very high resolution satellite images or geo-tagged photographs. Launched in November 2015, Picture Pile follows the success of the Cropland Capture game, which was used to collect more than 4.5 million image classifications on cropland in 2014. Picture Pile uses many of the same game mechanics as Cropland Capture, that is, the player swipes images to the Yes, No, or Maybe categories to classify them, but the interface has been made more generic so that any land cover or visible land use type can be interpreted using the game, including the option to detect change over time.

The scoring mechanism employed in Picture Pile is one of the main changes from the Cropland Capture game, which is based on lessons learned from an analysis of the Cropland Capture data [1]. Instead of a majority agreement approach, more use is made of expert data as reference images. These reference data are provided to the players throughout the game and incorrect answers are heavily penalized so that players learn over time. Each pile has an associated leader board and a chat channel, which makes it very easy for the players and the organizers to communicate. Players can also see their collective contributions as a real-time map of deforestation based on the answers collected through the game (Figure 2). 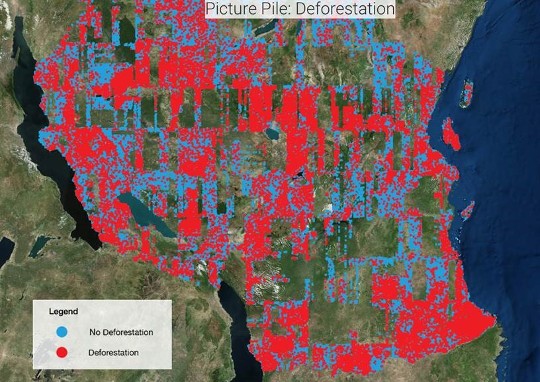