IIASA researchers aim to build a new deforestation map with the help of players in their new Picture Pile game. 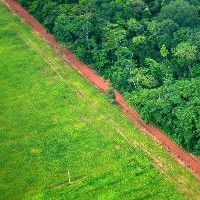 While multiple maps of global forest cover exist, deforestation is difficult to track for several reasons: first, satellite imagery can be of too low-resolution for forests to be accurately mapped. Secondly, deforestation often occurs in small chunks that may not be visible in medium-resolution imagery.  High resolution data can provide a clearer view of forested and de-forested land, but the datasets are massive and not free of charge

“It’s easy to look at an aerial photo or high resolution image and say, are there trees there or not,” explains IIASA researcher Steffen Fritz, who leads the institute’s Citizen Science Center. “But to build a map you need millions of data points—and to see change over time you need to repeat the exercise for multiple years of data.”

That’s where IIASA’s network of citizen scientists come in. The new Picture Pile game builds on the successful Cropland Capture game, which relied on players’ input to help build a new map of global cropland. This time the focus is on forests initially starting in Tanzania

Picture Pile makes use of very high resolution imagery from Digital Globe, spanning the last decade.  The game is arranged as a pile of picture pairs, with side-by-side images of the same location several years apart. It asks, “Do you see tree loss over time?” After examining the image the player drags the image right to say “yes,” or left for “no,”—much like the popular dating app, Tinder, except that players can also swipe down to say “maybe” if they can’t tell from the photo pair whether forest has been lost.

Since the game’s initial launch two weeks ago, players have already sorted 40,000 photos, a stack the size of an elephant. The goal is to sort all 5 million photos in the dataset. Once that’s done, the researchers say they plan to continue the game, turning the focus to other questions related to deforestation and land use change.

“It’s not just about monitoring deforestation, but also looking at what happens after an area is deforested—is it turned into farmland or a plantation, or is it allowed to regrow?” says Fritz. He says that future iterations of the game could also turn towards mapping human impact, disaster damage mapping, or water.

Picture Pile is available for free for the browser and for the Apple iOS and Android operating systems, via the Apple Store and Google Play store. 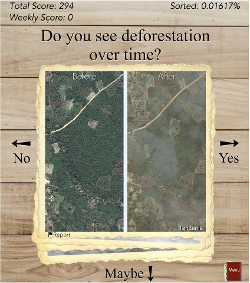