Leena Srivastava assumed her role as Deputy Director General for Science at the International Institute for Applied Systems Analysis (IIASA) on the 15 November 2019. 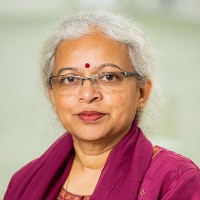 As Deputy Director General for Science Srivastava provides interdisciplinary scientific leadership to the institute to ensure that IIASA research stays at the forefront of scientific endeavor.

Srivastava was the Vice Chancellor of the TERI School of Advanced Studies, New Delhi, an interdisciplinary higher education institution focused on sustainable development from 2012 to 2019. Prior to this, she worked for over three decades on research in the areas of energy, environment, and climate change policies at The Energy and Resources Institute (TERI), including almost nine years as Executive Director.

She is highly engaged in climate and sustainable development issues through participation on various boards and committees, and in advisory roles in international organizations, research institutions, and the corporate sector.

Srivastava was the Coordinating Lead Author of ‘Working Group III’ of the Third Assessment Report of the Intergovernmental Panel on Climate Change (IPCC) and the cross-cutting theme Anchor on "Sustainable Development" for the Fourth Assessment Report of IPCC. She was a member of the Expert Committee devoted to framing India’s energy policies, and of the National Security Advisory Board of the Government of India. She is a co-chair of the science advisory group to the UN Secretary General’s 2019 Climate Action Summit; co-chair of the Advisory Committee of Future Earth; member of the president's advisory group on climate change and sustainable development at the Asian Development Bank.

Among other positions Srivastava was an independent and non-executive director on the boards of Bharti Infratel Ltd. and Shree Cement Ltd. in India and was on the sustainable development advisory board of Caterpillar Inc., USA, as well as the advisory boards of Cairn Energy, Vedanta Resources, and Consocia Advisory, India.

Srivastava has greatly contributed to improving the design of policies concerning energy consumption and efficiency in India. Furthermore, she has championed and endeavored to encourage increased cooperation regarding energy between countries in South Asia, such as Butan, Nepal, Bangladesh and India.

She has a number of awards to her credit including the Knight of the Order of Academic Palms (Chevalier Dans l’Ordre des Palmes Academiques) which she was given in 2008 by the Prime Minister of the Republic of France and she has also been awarded the ‘Certificate of Recognition’ by the Prime Minister of India for her contribution to the work of the IPCC.