Peter's legacy is inspiring the future generations of IIASA scholars. The postdoctoral fellowship endowed in his name offers selected postgraduate students the opportunity to participate in the IIASA Postdoctoral Program. 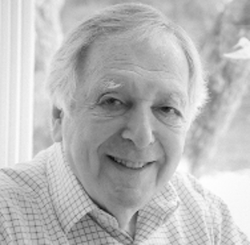 The IIASA Council established a Peter E. de Jánosi Postdoctoral Fellowship at IIASA in honor of the substantial contributions that Dr. de Jánosi made to IIASA as Director from 1990 to 1996, Council member from 1987 to 1990, and Program leader from 1976 to 1978.

Funded in its initial years by the Institute, the IIASA Fund Board of Trustees set a goal of $1,000,000 to fund the Peter E. de Janosi Postdoctoral Fellowship for at least ten years. This ambitious goal was met in June 2015.

The Institute thanks all those who have donated and now wishes to extend the campaign with a new goal to reach a second million, which will enable Peter's Fellowship to support one postdoctoral scholar per year for perpetuity.

by Roger Levien, IIASA Director (1975-81), President of the Friends of IIASA Board of Directors

Peter E. de Jánosi devoted a major portion of his life to IIASA. In fact, he served the Institute in more capacities over a longer period than any other person, before or since.  And he was associated with IIASA for a greater part of his life than he was with any other organization.

His engagement with IIASA began when the Institute was created in 1972. Peter, a program officer at the Ford Foundation, was assigned to manage a start-up grant that Ford had made to the Institute. In that capacity, he helped IIASA to surmount its start-up challenges.

When I became the director of IIASA in 1975, I recognized the need for help with management and asked the Ford Foundation for assistance. They responded generously, offering Peter’s services for two years, 1977-79.  He initially served as my Senior Advisor for Management, responsible for refining the young Institute’s management processes. Soon, however, I asked him to also become head of our System and Decision Sciences (SDS) area, home to IIASA’s economists and mathematicians.

After Peter returned to the world of foundations in New York City, he served as a member of the U.S. National Member Organization (NMO) of IIASA. When the Reagan Administration stopped funding IIASA in 1982, he was one of the group that kept US membership in IIASA alive. For several years during that time he served as a Council member, representing the US NMO on the IIASA governing body.

In 1990, Peter was appointed Director of IIASA.  He assumed his position just as the Cold War was ending.  Because IIASA had been created as a place to build bridges between East and West, the Institute’s existence seemed threatened. In response, Peter initiated a strategic planning activity. It led to a new mission for the Institute – addressing global issues faced by both the developed and developing world. The Institute’s Agenda for the Third Decade focused on global environmental and economic change, shifting its axis from East-West to North-South.

His contribution to IIASA and to global understanding was highly regarded and recognized with personal awards from the Austrian Government (Austrian Cross of Honor for Science and Arts, First Class), the City of Vienna (Golden Decoration), and the Budapest University of Economic Sciences (an honorary doctorate).

In sum: Peter served IIASA as Director for six years, the U.S. Council member for three years, Senior Advisor to the Director for Management and acting head of SDS for two years, and the manager of the Ford Foundation’s start-up grant.  In addition, he was a long-term member of the U.S. National Member Organization for IIASA and played an active role in obtaining funding for the Institute during a period when the U.S. government had suspended its financial support.

His contributions to IIASA were significant, diverse, and long lasting.  It is, therefore, appropriate that the Institute is memorializing him by appointing Postdoctoral Fellows in his name. We believe that those Fellows, inspired by his example, will devote their careers to understanding and addressing the challenges that the world faces.