Ecosystems Services and Management (ESM) researchers have been working to support policymakers in Brazil and the Congo Basin to identify land-use and forest conservation policies that are economically, socially, and environmentally optimal. 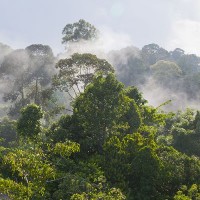 REDD+ stands for Reducing Emissions from Deforestation and Forest Degradation plus conservation of forest carbon stocks, sustainable management of forests, and increase of forest carbon stocks. Its policies targeting the major sources of land use, land-use change, and forestry (LULUCF) sector emissions under the UN Framework Convention on Climate Change (UNFCCC) will have, by definition, major impacts on land use. Land use in turn affects economic returns and ecosystem services. Thus, understanding how different policies could influence land use and its effects is essential to support informed decision making. Since 2012, the REDD+ Policy assessment center (REDD-PAC) supports policymakers in Brazil and the Congo Basin to identify REDD+ policies that are (i) economically efficient, (ii) socially fair, and (iii) can safeguard and enhance ecosystem values and help meet the goals of the Convention on Biological Diversity.

2015 was marked by the intensive preparation for the 21st UNFCCC Conference of the Parties (COP21) taking place in Paris in December 2015. During the whole year, the scientific team of the REDD-PAC project organized several meetings and workshops with policymakers in Brazil and the Congo Basin to present results produced with the GLOBIOM model which could inform reference levels on emissions from land-use change and agricultural sector and national commitments to reduce these emissions.

The Brazilian Ministry of Environment commissioned the REDD-PAC team to construct detailed scenarios to test the various provisions of the new Brazilian forest code. The results have been used to inform Brazil’s commitments to reduce emissions from land use and agriculture made in their Intended Nationally Determined Contribution (INDC) which was submitted to the UNFCCC in November 2015. Brazil is the first major country to commit to absolute emissions reductions from a base year, as opposed to reductions per unit of Gross Domestic Product. 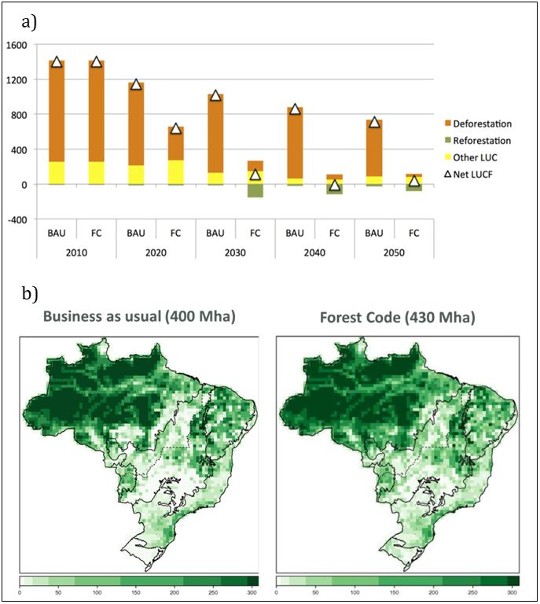 Figure 1. a) Evolution of the CO2 emissions from land-use change in Brazil between 2010 and 2050 in the Business as Usual scenario (BAU) and with the Forest Code scenario (FC) in Mt CO2, b) Forest cover in 2030 in the BAU on the left and in the FC on the right in millions of hectares.

Furthermore, the National Coordination of REDD+ in both Cameroon and the Democratic Republic of the Congo solicited the technical support of ESM’s Environmental Resources and Development team for the preparation of the forest reference emission level in 2016 in the framework of the countries’ engagement in the REDD+ process.