A new report from an international consortium including IIASA researchers provides the scientific guidance on deforestation and land use change to support Brazil in developing an evidence-based climate pledge. 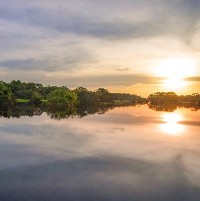 Brazil can balance its goals of protecting the environment and becoming a major global producer of food, wood products, and biofuels, according to a new report based on IIASA research. The report provides the land use, agriculture, and forestry background for Brazil’s proposed Indented Nationally Determined Contribution (INDC), the country’s commitment to greenhouse gas reductions until 2050.

This is the main message of the report launched today in Brazil, which was produced by the REDD+ Policy Assessment Centre (REDD-PAC), a collaboration between IIASA, the National Institute for Space Research (INPE) - Brazil, the Brazilian Institute for Applied Economic Research (IPEA) , and the United Nations Environment Program and World Conservation Monitoring Centre (UNEP-WCMC). It assesses deforestation, forest regrowth, crop production, and emissions from land use, forests and agriculture from 2020 to 2050.

"Working together with IIASA and UNEP-WCMC, the Brazilian team of researchers was able to adapt GLOBIOM to the Brazilian case,” says Gilberto Câmara, one of the senior Brazilian scientists of the REDD-PAC project team. ”We have built a unique tool that captures the different policy options on land use, with superb interaction with IIASA. Many rounds of consultation with government officers allowed us to produce realistic scenarios. Our results helped Brazil to propose emission reduction goals that are feasible, transparent and verifiable.” 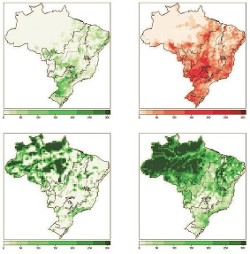 Brazil’s INDC, which was presented last week at the United Nations General Assembly, proposes to cut greenhouse gas emissions to 37% below 2005 levels by 2025 and 43% by 2030. Deforestation, agriculture, and land use change are a major source of emissions in the country. Targeting these areas with policies aimed and ending illegal logging, spurring reforestation, and increasing livestock productivity can provide a major contribution. With this step Brazil is the first major country to commit to absolute GHG emissions reductions, as opposed to reductions per unit of GDP.

“In our work for the EU analyzing in detail country pledges we see that Brazil seems to be an exceptional case presenting a technically detailed pledge which is workable, transparent, and ambitious,” says IIASA Ecosystems Services and Management Program Director Michael Obersteiner, who contributed to the report.

“This report shows how IIASA tools can be used by member countries for an international process to solve a global commons issue. It is at the heart creating the evidence base for a fair international process based on the principle of common but differentiated responsibility,” says IIASA researcher Aline Mosnier, who also worked on the study.

The report relies on the IIASA Global Biosphere Management Model (GLOBIOM), a global economic model, which was adapted specifically for Brazil in order to assess both internal policies and international trade in the areas of agriculture, forestry and bioenergy.