In 2014 World Population Program (POP) scientists undertook an extensive analysis of natural disaster data for 167 countries over the past four decades as well as a number of studies carried out in individual countries and regions to test the hypothesis that education is a key factor in reducing disaster fatalities and enhancing adaptive capacity. 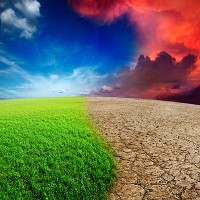 Findings were published in a special issue of the journal Ecology and Society [1]. The research shows that education is more important than GDP in reducing mortality from natural disasters. It also demonstrates that disaster fatalities will likely be reduced substantially across the globe under rapid development and educational expansion.

To support this conclusion, statistical analysis focused on the relative assessment of two factors i) Gross Domestic Product (GDP) per capita and ii) the proportion of women aged 20 to 39 with at least junior secondary education. The latter was shown to be a good indicator for the recent improvements in human capital in other contexts [2]. The study accounted for differences in the frequency of natural hazards experienced and size of the countries affected. In a number of alternative model specifications combined with different estimation techniques, GDP per capita turned out to be insignificant, whereas female education was highly significant with the expected negative sign. Further alternative scenarios for future disaster-related fatalities as a function of alternative future education and population trends were also presented.

Figure 1 shows the results of combining the estimated coefficients with two contrasting SSP scenarios (SSP1 and SSP3) for the rest of the century. This research was carried out by taking the time-varying population and education variables from the respective SSPs. Different assumptions were made for the frequency of disasters representing possible greater future hazards. Although there is still a slight reduction in future disaster deaths for SSP1, a strong increase is observed for SSP3. These results were published in Science in November 2014 under the title “Universal education is a key to enhanced climate adaptation” [3]. 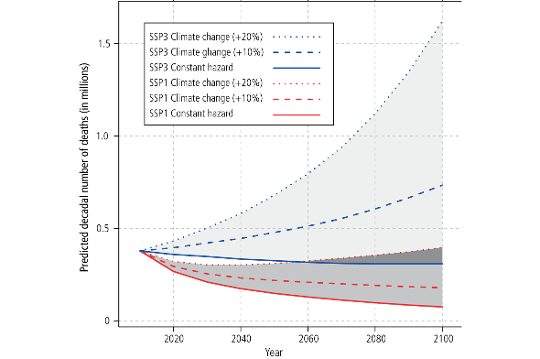 A concluding conference to the ERC Advanced Grant , Forecasting Societies’ Adaptive Capacities to Climate Change, was held on 23-25 April 2014 in Kao Lak, Phang Nga, Thailand, under the title Demographic Differential Vulnerability to Natural Disasters in the Context of Climate Change Adaptation. Forty researchers from different disciplines discussed this topic from different perspectives and presented case studies on the Phang Nga province which was severely hit by the Indian Ocean tsunami ten years ago. The seminar was organized jointly by the Scientific Panel on Climate Change of the International Union for the Scientific Study of Population (IUSSP), the College of Population Studies at Chulalongkorn University (Bangkok), and IIASA.

International Union for the Scientific Study of Population (IUSSP).

Education as defense to natural disasters