According to new IIASA research, education makes people less vulnerable to natural disasters such as floods, landslides, and storms that are expected to intensify with climate change. 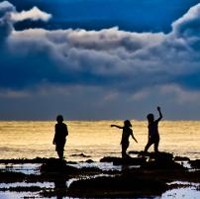 Given that some climate change is already unavoidable—as just confirmed by the new IPCC report—investing in empowerment through universal education should be an essential element in climate change adaptation efforts, which so far focus mostly in engineering projects, according to a new study from the International Institute for Applied Systems Analysis (IIASA) published in the journal Science.

The article draws upon extensive analysis of natural disaster data for 167 countries over the past four decades as well as a number of studies carried out in individual countries and regions, published last year in a special issue of the journal Ecology and Society.

The research shows that in many cases—particularly where the exact consequences of climate change are still unclear—educational expansion could be a better investment in protecting people from the impacts than conventional investments such as building sea walls, dams, irrigation systems, and other infrastructure.

“Education is key in reducing disaster fatalities and enhancing adaptive capacity,” says Wolfgang Lutz, Director of IIASA’s World Population Program and Founding Director of the Wittgenstein Centre for Demography and Global Human Capital, a collaboration of IIASA, the Austrian Academy of Sciences, and the Vienna University of Economics, who wrote the article together with IIASA researchers Raya Muttarak and Erich Striessnig, who have dual affiliations with the Vienna Institute of Demography and the Vienna University of Economics and Business, respectively.

“Our research shows that education is more important than GDP in reducing mortality from natural disasters. We also demonstrated that under rapid development and educational expansion across the globe, disaster fatalities will be reduced substantially,” says Muttarak.

Climate models project that extreme weather events such as hurricanes are likely to increase with climate change. And with rising sea levels, floods will become a greater danger in low-lying coastal areas.  So researchers from IIASA’s World Population Program launched a major research project to explore the connections between fatality rates in such disasters, education levels, and other potential factors that could contribute to resilience such as wealth and health.

Previous research had shown that education plays a major role in development, including poverty alleviation and economic growth. In regard to climate change adaption, “Education directly improves knowledge, the ability to understand and process information, and risk perception. It also indirectly enhances socioeconomic status and social capital. These are qualities and skills useful for surviving and coping with disasters”, says Muttarak.

The new study shows that education is the key factor in enhancing adaptive capacity to already unavoidable climate change. This insight is also reflected in the new generation of IPCC-related scenarios, the Shared Socioeconomic Pathways (SSPs) which were developed by IIASA researchers in collaboration with other leading global change research institutes to jointly capture different future socioeconomic challenges for climate change mitigation and adaptation. Using these SSPs, the new study illustrates how alternative future trajectories in education lead to greatly differing numbers of expected deaths due to climate change. Therefore, says Striessnig, “Investment in human capital not only empowers people to achieve desirable socioeconomic outcomes, but it also has a protective function against diverse impacts climate change may have over the coming decades."

With 100 billion dollars currently pledged per year for climate funding through the Green Climate Fund, the researchers say it is vital to examine where the money would have the greatest impact.

Striessnig says, “We need to think about how to best allocate the funds raised for the adaptation to future climate change. Currently many of these funds are destined to support less flexible engineering projects or agricultural strategies. Such efforts are also vitally important, but in light of the major uncertainties about climate change impacts, it makes sense to invest some of the funds in mechanisms that will empower people to flexibly adapt to whatever changes might occur.”

Education: Preparation for the unexpected