Education: Preparation for the unexpected

February, 2013: Education is the single most important socioeconomic factor affecting people’s vulnerability to natural disasters, both regionally and globally, according to new IIASA research. 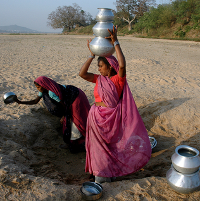 Two new studies published in the last week in the journal Ecology and Society show that better education can help people survive and recover after natural disasters such as floods, landslides, storms, and fires. The new findings, from researchers in IIASA’s Population and Risk, Policy, and Vulnerability programs, provide new insight into strategies to address disaster preparation, as well as climate change adaptation, since certain natural disasters are expected to increase as climate change becomes more pronounced.

While further research is needed to tease out the specific effects of education on vulnerability, the researchers say that their findings indicate that better education could help minimize the deaths and destruction caused by disasters all over the world. Erich Striessnig who led one of the studies, says, “Being more educated oneself and having more educated people within a community leads to better preparedness for these kinds of events.”

One study, by IIASA researchers Striessnig, Anthony Patt, and Wolfgang Lutz, found that education is a key factor determining how people will survive the natural extreme events such as storms, droughts, floods, and landslides that are expected to happen more frequently in a warming climate.

“We find quite significantly in different models that education is the strongest social indicator reducing vulnerability to extreme natural events,” says Striessnig.

In addition, the study showed that education of young women between the ages of 20 and 39 was the most important influence on vulnerability. The study used a wealth of data including IIASA population projections that measure education levels for 130 countries by age and sex.

Striessnig says that these findings could influence how policymakers approach climate adaptation strategies. He says, “We see a big danger that a lot of money is going to be spent in ways that simply don’t make any sense. It makes much more sense to just empower people and to give them general flexibility with regard to still uncertain climatic circumstances, in the form of better education.”

While previous work had found connections between education and disaster vulnerability, it wasn’t clear whether education directly influenced preparedness, or whether it was tied to other factors like income that might also influence people’s capability to respond to and prepare for disasters. The new study split out education from a broader measure called the Human Development Index (HDI), which also includes health and income data. Compared to health and income, education had the strongest effect on disaster vulnerability.

Floods and landslides in Nepal

A second study, by IIASA researcher Samir KC, found that the effect of education persists when one looks at a specific country. KC examined education levels and disaster response in Nepal, his native country, using village-level disaster data and census data from the Nepalese government.

“The effect of education is very clear,” says KC. “In all of our models, for different regions of Nepal, we found that education always had a positive effect in reducing the vulnerability.” 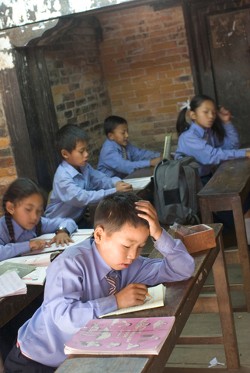 Interviews in Nepal suggested that one reason that education has an effect on disaster vulnerability is that children learn about specific risks in school, and bring that information home to their families.

The model data could not establish a causal link between education and disaster vulnerability, but the connection was strong enough that KC decided to visit Nepal to follow up with a series of interviews. Those interviews provided a number of potential reasons for the effect. For example, says KC, “Education helps in terms of preparing yourself, making you less vulnerable by anticipating the risks that are coming towards you.” Interviewees also noted that education about specific risks through schools or the community had helped them prepare for disasters.

Community vulnerability to floods and landslides in Nepal. Ecology and Society