A new study published in the journal Demography shows that improvements in education levels around the world have been key drivers of economic growth in developing countries that has previously been attributed to declines in fertility rates. 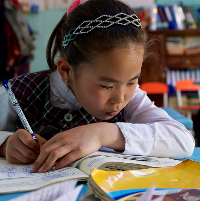 The study, by IIASA researchers and colleagues at the Wittgenstein Centre for Demography and Global Human Capital, a collaborative center including IIASA, Vienna University of Economics and Business, and the Austrian Academy of Sciences, sheds new light on a central tenet of demographic research that posits that economic development is tied to decreasing fertility rates.

Instead, the researchers find that the observed improvements in economic development can be largely explained by increasing education levels of younger people.

“Countries where a large part of the population is in working age tend to become richer quicker than those with a sizable proportion of children or elderly people,” explains Jesus Crespo Cuaresma, a researcher at IIASA, professor at the Vienna University of Economics and Business, and the lead author of the study.

“Demographic change influences economic growth,” says IIASA researcher and Stoney Brook University professor Warren Sanderson, who also worked on the study. Many demographers argue that as a consequence of declining birth rates the proportion of children in the population declines and this results in a “demographic window of opportunity,” where a larger proportion of people is of working age.

This observation—known as the demographic dividend—was widely assumed to be a direct linkage, and had led to policy prescriptions aimed at decreasing fertility.

But, says Crespo Cuaresma, “Our study shows that such a paradigm may be flawed. Reducing fertility is not enough.”

The new study finds that instead, the previously identified association between lower birth rates and economic development is largely explained by education: As the fertility rate declines, educational levels of young adults also increased.

To tease out those cause and effect of education versus fertility rates, the researchers used a new set of educational attainment data for 105 countries around the world, reconstructed by demographers at the Wittgenstein Centre.  They then used statistical models to examine the potential causative linkages between factors such as fertility rate, proportion of people in the labor force, and educational variables.

“The new findings demonstrate the decisive role of investments in universal education in bringing countries out of poverty,” says Wittgenstein Centre Director and IIASA World Population Program leader Wolfgang Lutz, another co-author on the study. “These insights matter greatly for the ongoing international discussions around extensions of the Millenium Development Goals adopted by the United Nations.”