September, 2013:  When disaster hits, the way people respond is a matter of life and death—and that response depends strongly on how prepared people are. New IIASA research highlights the role of education in surviving hurricanes. 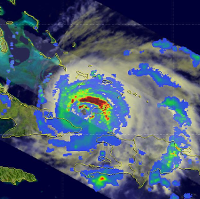 Haiti, the Dominican Republic, and Cuba all experience regular hurricanes, because of their exposed geographic position. But these devastating storms have drastically disparate impacts on people in the three Caribbean island nations. While hurricanes in Cuba lead to similar amounts of physical damage – for example to houses, roads, and farms—far fewer people die as a result of major storms as in the other two countries. For example, in 2004, Hurricane Jeanne led to 2,700 deaths in Haiti, 20 in the Dominican Republic, and no deaths on Cuba.

That difference is largely because of differences in education, according to a new study published this week in the journal Ecology and Society by IIASA population researcher Erich Striessnig and Adelheid Pichler of the University of Vienna.

“Cuba’s population stands out in the developing world in terms of disaster preparedness thanks to its remarkably high level of education,” says Striessnig. In comparison to its Caribbean neighbors, Cuba has an extremely high education level—literacy for 15-24 year-olds in Cuba has been at a 100% for decades, while in 2010 in the Dominican Republic the literacy rate was still only at 96.8% and at in Haiti according to the latest available figure from 2002, literacy was at 72.3%. In contrast to its neighbors, Cuba also focuses specifically on disaster preparedness education.

Previous research by Striessnig and colleagues has shown a connection between education and disaster response for 130 countries around the world. The new study focuses in on the behavioral and social drivers that lead to these connections, in a specific location. 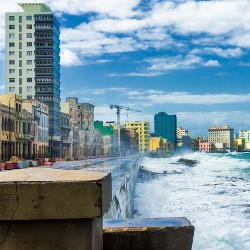 The island of Cuba is similarly vulnerable to hurricanes as Haiti and the Dominican Republic, but people rarely die there as a result of storms.

Through extensive field work by the lead author of the study, Adelheid Pichler, the researchers were able to highlight the major challenges faced by people on the islands of Cuba and Hispaniola before, during, and after hurricanes strike. The micro-level evidence from qualitative interviews and a specially designed questionnaire confirmed those earlier results. “Thanks to our micro-level findings,” says Striessnig, “we improved our understanding of how education can influence life-saving action, making it one vital link in the early warning chain that often makes the difference between life and death.”

Another vital link that the researchers investigated is a long-standing relationship of trust between the helpers and the helped observable in Cuba and that is contrasted sharply by the deep distrust towards the state and its institutions in the other countries. Pichler says, “If the government is not prepared, neither is the individual. If government responsibility fails, or simply is not present, then there is no trust in one’s own competence either, with a corresponding apathy, ignorance, and sense of impotence in the face of the plight.”

Although the authors are aware of the differing political systems within the countries under study, Cuba has nevertheless found purposeful interventions to cope with natural disasters despite not being a prosperous nation. "Looking into the future, Cuba's society seems astoundingly resilient with respect to the expected climate change and should be considered as blueprint for the entire region," says Pichler.