The approach to human capital projections 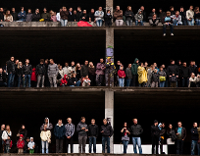 In 2014 the World Population Program (POP) together with the Wittgenstein Centre for Demography and Global Human Capital (IIASA, VID/ÖAW, WU) produced a new set of world population projections. This is based on the broadest ever international review about what we know today about the drivers of fertility, mortality, migration, and education in different parts of the world and what we can assume for the future.

The new results are presented in the Oxford University Press volume World Population and Human Capital in the Twenty-First Century (eds. W. Lutz, W.P. Butz, S. KC). It is the first book to systematically and quantitatively address the role of educational attainment in global population trends and models. By adding education to the traditional demographic characteristics of age and sex, this distinguishing feature substantially alters the way we look at changes in populations and how we project them into the future. Through the systematic addition of the education dimension, this approach can be thought of as adding a ‘quality’ dimension to the consideration of population numbers.

How the assumptions were defined

The volume documents and discusses the international state of the art in the fields of fertility, mortality and migration through reviews of relevant literature and by presenting and discussing the scientific input from over 550 international population experts who contributed in different capacities. This broad knowledge base is synthesized and translated into alternate numerical assumptions for calculating alternative scenarios to 2060 with extensions to 2100, and for 5-year age groups for men and women by six levels of education.
The toolbox of technical demographers contains the powerful methods of multidimensional (multi-state) population dynamics, which were developed around 1980 at the World Population Program at IIASA. They represent a generalization of the widely used cohort-component method of projecting by age and sex and are tailor-made for the task of integrating the processes of human capital formation with education specific fertility, mortality, and migration.
The data, analyses, and scenarios presented in this book allow for a richer and more convincing assessment of the returns to education in terms of desirable individual and social futures. They suggest that strengthening the human resource base for sustainable development should be the overriding population policy priority for the 21st century.

The complete results are presented on a designated web site www.wittgensteincentre.org/dataexplorer/.

The UN and IIASA population projections use very different approaches for defining the assumptions underlying future fertility and mortality trajectories which result in divergent population projections. There are two other factors explaining the difference: One is that IIASA now systematically adds a differentiation by level of education. Once this important source of population heterogeneity is explicitly taken into account the future looks different. In the example of Nigeria, the UN projects an increase from 160 million in 2010 to 914 million in 2100 while IIASA projects only 576 million. Another difference lies in the reading of the current fertility levels in Africa as well as in China. The UN assumes that fertility in Nigeria has been stagnant at 6 children per woman for the past decade and for this reason their purely statistical model results in very slow future decline. However, the most recent Demographic and Health Survey (DHS 2013) for Nigeria shows that fertility has already declined to 5.5—a level the UN assumes would only be reached by 2020-25. (IIASA blog to this topic)

Since the early 1970s, IIASA has had a demography group that focused in the early years on developing the methods of multidimensional mathematical demography. These methods incorporate a generalization of the conventional life table and cohort-component approach to population forecasting in which the population is stratified by demographic dimensions beyond age and sex. Inspired by the need for long term population scenarios by IIASA’s environmental change programs, since 1990 IIASA’s World Population Program produced actual international projections and developed the approach of expert-argument based projections and pioneered global probabilistic projections.

Will the world's population stop growing?

Presentation and Panel Discussion: World Population and Human Capital in the 21st Century

IIASA demographers explain why they project the world population to peak this century and UN demographers believe stabilization is unlikely.