Policy Brief #11, September 2014. According to the results of new population research, strengthening human capital by focusing on education and health should become the main goal of national population policies throughout the world. 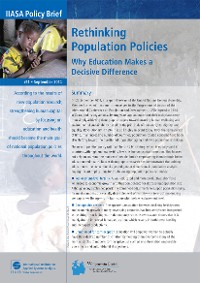 On 22 September 2014, at a special session of the United Nations General Assembly, Member States will recommit themselves to the Programme of Action of the International Conference on Population and Development (ICPD), agreed in 1994 in Cairo, and its key actions. Twenty years ago an important shift took place away from simply achieving demographic targets toward ensuring human wellbeing and environmental sustainability based on the principals of human rights, dignity, and equality. Revolutionary in 1994, it is still highly relevant today. Over the same period of time, in an increasing number of countries, population‑related concerns have been also shifting toward the question of population aging and even population shrinkage.

Infographic: Will the world's population stop growing? It depends on progress in female education

The new population policy rationale for the 21st century, which is equally valid in countries with high and low fertility levels, is human capital formation. This focuses not only on counting the number of people, but on empowering them through better education and health. Recent demographic research has demonstrated that adding education to the conventional age and gender dimensions in population analysis has significant implications for the following population policy rationales:

Replacement‑level fertility A well‑educated and more productive labor force will increase economic growth and thus compensate for decreasing population size. Although many established pension systems need adjustments to support population aging, for most countries the socially desirable level of fertility—in terms of maximizing per capita wellbeing—is, in fact, somewhat below replacement level.

Demographic dividend The apparent association between declining fertility rates and economic growth in many developing countries has frequently been interpreted as resulting from falling youth dependency ratios. New research shows that it is mainly due to improved female education, which results in both lower fertility and increased productivity.