In a new blog post, IIASA's demographers explain why they project the world population to peak this century and UN demographers believe stabilization is unlikely. 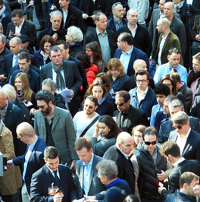 Demographers from the United Nations Population Division and several universities published a paper in Science last week arguing that there is an 80% probability that world population, now 7.2 billion, will increase to between 9.6 and 12.3 billion in 2100.

On 23 October 2014, IIASA's demographers will announce the results of their newest assessment at the launch of a new book entitled: “World Population and Global Human Capital in the 21st Century” (Lutz, Butz and KC, Oxford University Press 2014). Contrary to the UN projections, the IIASA medium (most likely) scenario indicates that world population will increase to 9.2 billion by 2050, peak at 9.4 billion around 2070 and start a slow decline to 9.0 billion by the end of the century.

The Guardian: World population to hit 11bn in 2100 – with 70% chance of continuous rise
New study overturns 20 years of consensus on peak projection of 9bn and gradual decline