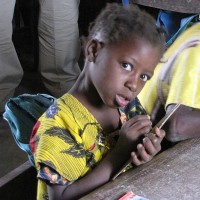 The United Nations (UN) projects that the world population will grow to 11 billion by 2100. But that number may be off by two billion, according to new population projections developed by IIASA and the closely affiliated Wittgenstein Centre for Global Human Capital. Their projections show that world population is likely to peak at 9.4 billion around 2070 and then decline to around 9 billion, with alternative scenarios that range from 7 billion to almost 13 billion.

Why do IIASA’s projections differ from the UN’s? In part it is because of different data being used for fertility trends, which are the main drivers of long-term population growth. But the major difference lies in the explicit consideration of education and in the assembly of massive expert knowledge used to produce the new IIASA projections, which were published this fall in a new book, World Population and Human Capital in the 21st Century.

“This book presents the broadest ever synthesis of expert knowledge on drivers of fertility, mortality, migration and education in all parts of the world,” says Wolfgang Lutz, director of IIASA’s World Population Program and founding director of the Wittgenstein Centre for Demography and Global Human Capital, a collaboration of IIASA, the Austrian Academy of Sciences, and the Vienna University of Economics (WU). Lutz led the project, which involved over 550 experts in a series of surveys and expert workshops held on five continents. 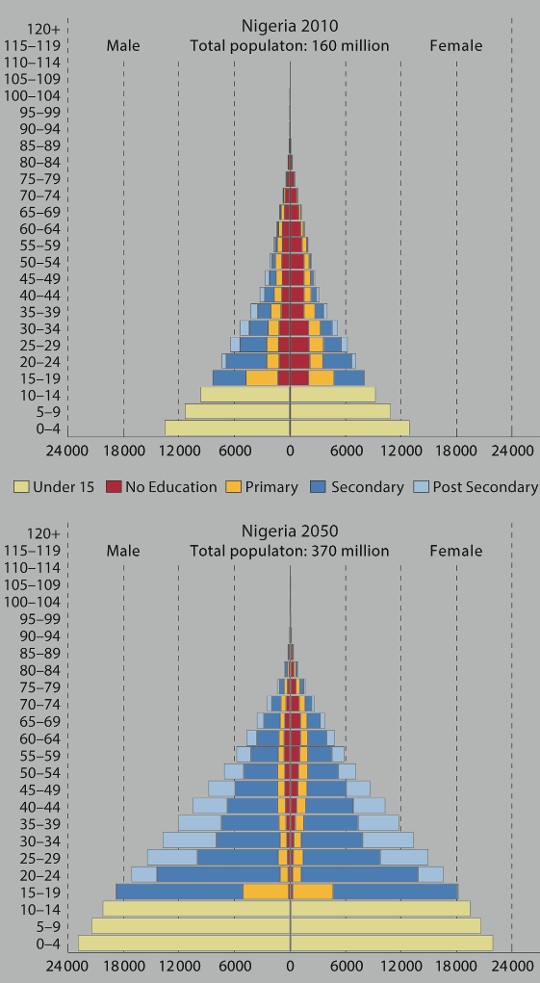 The medium, or most likely, scenario in IIASA’s new population projections show world population peaking by around 2070 and then declining to approximately 9 billion (top). The new population projections explicitly include education, which is one factor that leads to lower fertility rates and lower projections by IIASA compared to the United Nations. In the case of Nigeria, IIASA projections also consider recent advances in the country in women’s education. Since more educated women consistently have fewer children, they project that future fertility will decline. The pyramids (left) show the projected population of Nigeria by age, sex, and education level for 2010 and 2050.

The potential number of people on the planet is far from the most important information contained in their new data, say Lutz and his colleagues.

“What’s important is not simply the number of people, it is their capabilities, their health, and how much education they have—what we call human capital” says Lutz. A growing body of research from demographers at IIASA and beyond has shown clearly that education is vital in determining future population growth, future health, as well as many other factors including economic growth, quality of governance, and the capacity to adapt to climate change. Education has long been considered a key driver in demography but was not explicitly incorporated into the models because of lack of data and unfamiliarity with the multidimensional methods. 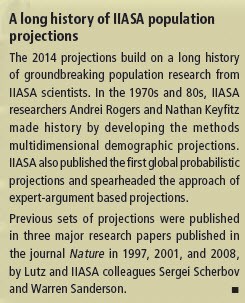 “But now the data and the appropriate methods are there, and there is no reason to maintain the conventional narrow focus on just age and sex,” says Lutz. As Joel Cohen of The Rockefeller University and Columbia University wrote in a review of the book, "This monumental, pioneering volume proselytizes for a new trinity of fundamental of demography: age, sex and education. If this book succeeds in its mission, as I hope it will, the future will look different, not only for the science of demography, but also for all people’s lives.”

“When we think about human behavior it makes sense that what is in your brain is equally or even more important than your age, gender, or what is in your wallet,” says Lutz. He notes that the new approach will have far-reaching implications for research on future social and economic change.

This explicit consideration of education also has direct implications for population projections. In the case of Nigeria, the above-mentioned UN projections show an increase from 160 million in 2010 to 914 million in 2100.

“These projections assume that fertility has remained stagnant at six children for the past 10 years, and will then decline more slowly than IIASA projections suggest,” says Lutz. “But if we look at the education of young women today, we see that in the 20 to 24 age group, half already have secondary education, while among women aged 40 to 44 it is only a quarter. And since more educated women consistently have lower fertility, future fertility is likely to decline, as the more educated girls enter reproductive age. Disregarding this important structural change leads to higher projections of future fertility.”

The new IIASA projections also take into account a growing body of research that redefines how people age, so that in the new projections, the proportion of the population that is considered old is based on years of remaining life expectancy, rather than an arbitrary number of years lived. 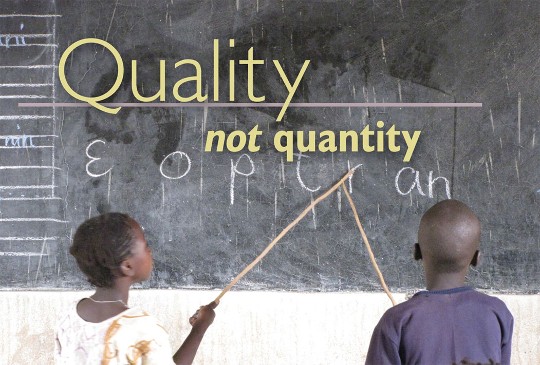 Having such a detailed view of future population and relevant characteristics lends itself to application in today’s ever more complex and interconnected research, and the projections were designed with this in mind: They form the “human core” of the next generation of climate scenarios, known as the Shared Socioeconomic Pathways (SSPs), which will likely play a key role in future global change analysis including the Intergovernmental Panel on Climate Change (IPCC). The medium population and human capital projection, considered the most likely, corresponds to the middle-of-the road SSP (SSP2), which assumes that many aspects of the world will continue along their current trajectory.

The other four SSPs represent various possible future paths, depending on different assumptions about future changes in education, economic growth, and other factors that can influence population growth. IIASA researcher Samir KC worked closely with the population side of the SSP development. He says, “Past climate scenarios only used total population size. Now, the representation of population as a driver is much richer by having the full age, sex, and education distributions.” Different scenarios based on these distributions can make a big difference to future economic growth and technology and in fields related to climate change, including energy and food demand.

A treasure trove for research

The data are now freely available for download via an online data exploration portal (see box), and researchers have already begun using them to enrich their understanding of natural disaster vulnerability, impacts of aging populations, and more.

For example, one major research project at IIASA has examined the links between education and vulnerability to natural disasters. The research, now published in a special issue of the journal Ecology and Society, showed that female education is strongly associated with lower levels of disaster fatalities around the world, both in developing and developed countries. Researchers found a correlation across 167 countries for which data were available, and have also conducted detailed case studies in specific countries and regions, including Nepal, Thailand, and the Caribbean. In each case, the researchers found a strong link between education and lower fatality rates in the case of natural disasters—from hurricanes to landslides—which could not be explained by differences in income or national GDP. 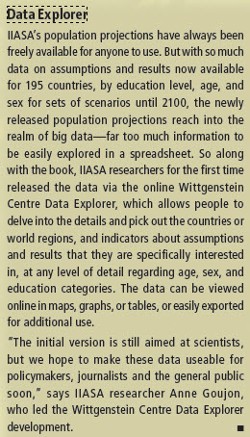 Lutz and colleagues have also drawn on the new projections in a re-examination of what should be seen as desirable fertility levels. In many developed countries, birth rates have been declining to what are now well below replacement rate, or two children per woman. The new projections assume that fertility trends are unlikely to rebound to replacement level in the foreseeable future. Is this a problem? In a recent study in the journal Demographic Research, the researchers found that it may in fact be a positive.

“People have this idea that replacement level fertility is the ideal,” days Lutz. “But like other questions, when we factor in education, the picture looks quite different.” A more educated workforce tends to be more productive and healthier, according to the study, which means that even with fewer people of working age, the economy does not have to go into decline and that there are more resources per child to invest in human capital formation.

Striessnig E, Lutz W (2014). How does education change the relationship between fertility and age‑dependency under environmental constraints? A long‑term simulation exercise. Demographic Research 30(16):465–492