New population projections from IIASA researchers provide a fundamentally improved view of future population, structured by age, sex, and level of education, which differ from recent projections by the United Nations. 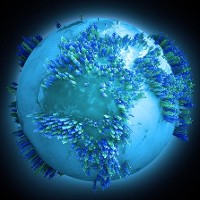 World population will likely peak at 9.4 billion around 2070 and then decline to around 9 billion by 2100, according to new population projections from IIASA researchers, published in a new book, World Population and Human Capital in the 21st Century. Alternative scenarios included in the projections range from 7 billion to almost 13 billion by 2100. The book will be officially launched today at an event at the Wilson Center in Washington DC.

More than just population numbers, the new book also includes specific projections for population by age, sex, and education level, for 195 countries in the world, from 2010 to 2100.

“This book presents the broadest ever synthesis of expert knowledge on drivers of fertility, mortality, migration and education in all parts of the world,” says Wolfgang Lutz, who led the project. Lutz is Director of IIASA’s World Population Program and Founding Director of the Wittgenstein Centre for Demography and Global Human Capital, a collaboration of IIASA, the Austrian Academy of Sciences, and the Vienna University of Economics.

The book involved over 550 experts in a series of surveys and expert workshops held on five continents, in order to include the most accurate and up-to-date information on fertility rates, migration, and other demographic variables for each country around the world.

The new projections are the first to structure population projections for all countries by age, sex, and education, rather than just age and sex, as is done by traditional demographic projection tools. 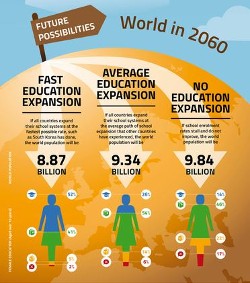 Infographic: Will the world's population stop growing? It depends on female education! Click to view the full graphic.

“As women become more educated,” says Lutz, “They gain more power over their reproductive decisions and family size, which almost always translates to having fewer children.”

The projections also show that the current trend of population aging, predominant in Europe, Asia, and other developed regions, is likely to continue and grow more pronounced. However, a growing body of research suggests that traditional measures of age are no longer sufficient, and therefore the projections include new measures of age developed by IIASA researchers which also reflect remaining life expectancy.

The new projections are already being used in the next round of scenario development known as the Shared Socioeconomic Pathways (SSPs), in the context of the Intergovernmental Panel on Climate Change (IPCC) and by the broader scientific community.

The new IIASA projections differ from recently updated UN projections indicating that world population is likely to reach 11 billion by 2100. For example, in Nigeria, the UN projections show an increase from 160 million people in 2010 to 914 million in 2100. However, this assumes that the fertility rate in the country have recently been stagnant at six children per woman and will only decline slowly. The IIASA data show that fertility rates have already declined to 5.5 and assume a more rapid decline due to the fact that women entering reproductive age are already much better educated than women in higher age groups.

The new population projections were published in the Oxford University Press book, World Population and Human Capital in the 21st Century, which will be officially released on 23 October in Washington DC, at the Wilson Center.

A second launch event will follow at the Oxford Martin School in the United Kingdom on 3 November. The data are also freely available online via the interactive Wittgenstein Centre Data Explorer

Praise for the new book

“This monumental, pioneering volume proselytizes for a new trinity of fundamentals of demography: age, sex, and education. If this book succeeds in its mission, as I hope it will, the future will look different, not only for the science of demography, but also for all people's lives.”

“This book on human numbers and the quality of lives will deservedly become our first port of call whenever we seek to understand our past and our possible futures. It is simply a monumental piece of work.”