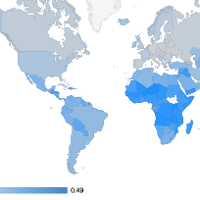 The Wittgenstein Centre Data Explorer was developed by IIASA's World Population Program scientists in partnership with the Vienna Institute of Demography (VID) of the Austrian Academy of Sciences researchers under the umbrella of the Wittgenstein Center for Demography and Global Human Capital (IIASA, OeAW, University of Vienna).

Designed using R+Shiny, the Data Explorer provides data, projection assumptions, and results on the population of all world countries (200) and regions by age, sex, and education for alternative scenarios from 2010 to 2060 with extensions to 2100, based on different scenarios (5) of future population and human capital trends. Other indicators related to fertility, mortality, and migration are also available. There is the option of consulting the data online or downloading into a file (CSV) that can also be read using the software. The Data Explorer includes graphical representation in the form of dynamic pyramids and maps. The users can access links to country profiles and the relevant meta-data for more details.

The preliminary results of the population projections by levels of educational attainment were published in 2018 in Lutz, Goujon, KC, Stonawski, and Stilianakis (Eds.). Version 2.0 provides an update of the projections (scope, coverage and quality) also relying on the work presented in Lutz, Butz and KC (Eds.) in 2014 by a large team of researchers at the Wittgenstein Centre and at other institutions. It also includes back projections from 2015 to 1950. More information in Speringer et al. 2019.

The Human Capital Data Explorer contains detailed data by age, sex and educational attainment (6 categories and up to 8 for 60 countries) for a large set of indicators:

The graphic explorer allows to visualize population pyramids and the population size by education for any country and to create maps about the available indicators. All graphics can be downloaded.

The present version (2.0) benefitted from the partnership with the Joint Research Centre in the Centre of Expertise on Population and Migration (CEPAM). On top of the assumptions about future trends in fertility, mortality, and education, the projections study the effect of several migration assumptions applied to the context of the set of Shared Socioeconomic Pathways (SSP) scenarios related to the Intergovernmental Panel on Climate Change (IPCC).

Further reading on the data from the global population projections by age, sex and education is provided in Lutz, Goujon, KC, Stonawski, and Stilianakis (Eds.) (2018) and in Speringer et al. (2019) for the reconstruction. Further features about the methodology can be found in Lutz, Butz, and K.C. (2014). 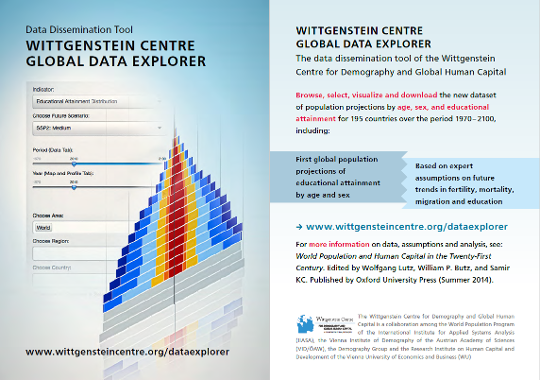 Centre of Expertise on Population and Migration (CEPAM)