Assessment of the Durban Platform and the 2°C target

The Energy (ENE) Program in collaboration with its main partners successfully completed the LIMITS project, a multi-year research effort on assessing the climate policy implications of the Durban Platform for enhanced action on climate change. 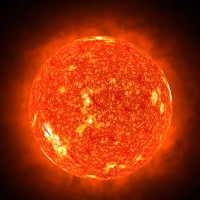 A Summary for Policymakers was completed in 2014, and the scientific results of the project were published in Nature Climate Change in January 2015 [1]. Several policy insights have emerged from the scenarios developed under the project which also fed into the Fifth Assessment Report of the Intergovernmental Panel on Climate Change, published in 2014.

The report highlights the need for rapid and fast action in order to achieve 2°C with adequate probability; this would require a commitment to emissions peaking as early as 2020, with later dates leading to lower chances of attaining 2°C and to significantly higher transitory decarbonization and economic efforts.

To make the low carbon transition possible, large-scale financing of the order of US$1 trillion/yr will need to be redirected from fossil to low carbon sources. Another major challenge identified is that the distribution of policy costs was found to be very uneven across regions in the absence of compensatory mechanisms. The main reasons are the large differences in regional abatement potentials and differing economic structures. The study shows how different sharing mechanisms based on the establishment of carbon permit markets could potentially alleviate these regional discrepancies. 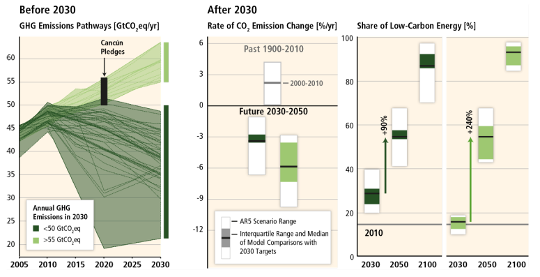 Figure 1. IPCC assessment of delayed action for reaching 2°C with >50% chance: the implications of different 2030 GHG emissions levels (left panel) for the rate of CO2 emission reductions from 2030 to 2050 (middle panel) and low-carbon energy upscaling (right panel). The scenarios are grouped according to different emission levels by 2030 (different shades of green). The left panel shows the pathways of GHG emissions (GtCO2eq/yr) leading to the 2030 levels. The black bar shows the estimated uncertainty range of GHG emissions implied by the Cancún pledges. The middle panel denotes the average annual CO2 emissions reduction rates for the period 2030–2050. It compares the median and interquartile range across scenarios from recent intermodel comparisons with explicit 2030 interim goals to the range of scenarios in the Scenario Database for WGIII AR5. Annual rates of change in historical emissions between 1900 and 2010 (sustained over a period of 20 years), and average change in annual emissions between 2000 and 2010 are shown in gray. The arrows in the right panel show the magnitude of zero and low-carbon energy supply upscaling from 2030 to 2050 subject to different 2030 GHG emissions levels. Zero- and low-carbon energy supply includes renewables, nuclear energy, fossil energy with carbon dioxide capture and storage (CCS), and bioenergy with CCS (BECCS). Source: AR5, IPCC WGIII, Summary for Policymakers (click on image to enlarge).