The Energy (ENE) Program’s Joeri Rogelj led a study that explored and quantified the interactions and uncertainties of reductions of emissions of short-lived climate forcers (SLCFs) and carbon dioxide, that resulted in two publications. 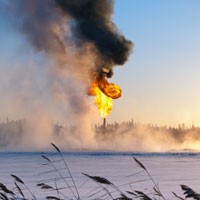 An exceptionally important stream of ENE’s methodological work is the study of SLCFs, such as black carbon and tropospheric ozone, that—unlike greenhouse gases—remain in the atmosphere for a very short time. Such pollutants can influence Earth’s climate by changing its reflective properties or by causing cloud formation. Although the issue is highly policy-relevant, the literature has few examples of scientific studies that provide an integrated view.

In the first study, ENE quantified scenario uncertainties to explore possible ranges of air pollutants, consistent with either very high or very low future carbon dioxide emissions. This resulted in an anchoring study [1] that provides guidance to both the global climate modeling and integrated assessment modeling communities on this issue.

In a second study ENE led an international team of researchers to answer a more directly policy- relevant question: what are the trade-offs and synergies between reductions of SLCFs and carbon dioxide? The new integrated study [2], which received an excellent response in the international media, shows that targeting emissions of non-CO2 gases and air pollutants could produce smaller benefits than previously estimated. While near-term action on short-lived climate forcers can help reduce warming in the coming decades and also provides other societal benefits such as cleaner air, it will not buy more time for delaying the reductions in carbon dioxide emissions which are required to stabilize the climate at safe levels. The study highlights the critical importance of integrated approaches to problems such as climate change, air pollution, and energy policy.