The Energy (ENE) Program coordinated a number of major research community activities, in particular the further development of quantitative scenarios for the Shared Socioeconomic Pathways (SSPs), which form part of the new framework adopted by the climate change research community to facilitate the integrated analysis of climate impacts, vulnerabilities, adaptation, and mitigation. 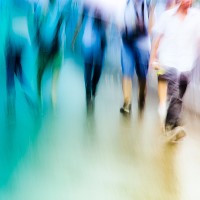 With the conceptual framework of the SSPs successfully completed in 2013, activities in 2014 focused on the finalization of qualitative narratives and the further development of quantitative scenarios for the SSPs.

Collaboration at IIASA with the Ecosystems Services and Management (ESM) and Mitigation of Air Pollution and Greenhouse Gases (MAG) programs has focused on the so-called middle of the road scenario SSP2. A related paper was published in the special issue of the journal Global Environmental Change. ENE Program Director Keywan Riahi also edited the full special issue [1].

Major progress was made in developing detailed quantitative scenarios for the energy, land, and economic transitions of the SSPs in 2014.

ENE is coordinating the overall SSP scenario development process, which involves other major integrated assessment teams from Asia, Europe, and the USA. The development of the SSPs continues to guide important methodological improvements and extensions of the present IIASA-ENE modeling tools, including the endogenous representation of land-use change with ESM.

Overall, the SSP scenarios underwent multiple rounds of internal reviews in 2014. Completion of the scenarios is planned in early 2015, when all data will be made publicly accessible for an extensive community review.

Similar to earlier SSP datasets for the community, the scenario data will be hosted by the IIASA-SSP interactive database [2]. The “official” launch of the SSP scenarios was scheduled to take place at the Intergovernmental Panel on Climate Change Expert Meeting on Scenarios, to be hosted by IIASA in May 2015. Preparations have started for the meeting, which promises to become a critical milestone in the climate research community’s collaborative effort toward a better-integrated climate research agenda.