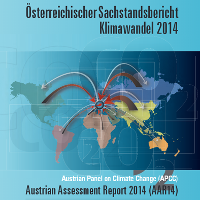 The Austrian Assessment Report 2014 (AAR14) [1] of the Austrian Panel on Climate Change (APCC) is a national counterpart to the assessment reports of the IPCC. It was compiled by more than 240 scientists in Austria working in the field of climate change over a three-year period.

Nebojsa Nakicenovic was overall APCC project director and co-organizer, assisted by Mehdi Bano and Caroline Zimm, and Keywan Riahi coordinated the massive review process involving some 70 anonymous reviewers and 13 review editors. He was assisted by TNT’s Mathis Rogner in this task.

The AAR14 depicts the state of knowledge on climate change in Austria: the impacts, mitigation, and adaptation strategies, as well as the associated political, economic, and social issues. A specific feature of AAR14 was an extensive consultation with local stakeholders during the assessment process. The report was formally presented on September 17, 2014 domestically and then internationally at the UNFCCC Conference of the Parties 20 in Lima in December 2014.

Presentation of the Austrian Climate Report