Important progress was achieved by scientists of the Transition to New Technologies (TNT) Program in a number of in-house collaborative research projects and externally funded research contracts, including a project within IIASA’s Advanced Systems Analysis Forum. 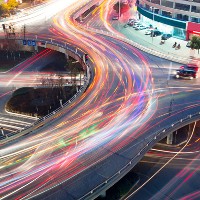 At the core of an exploratory research project conducted in collaboration between the Advanced Systems Analysis (ASA) and TNT programs is that history unfolds as a combination of random, serendipitous events (e.g., knowledge discovery) which punctuate the cumulative effects of long-term structural evolution. The historical past, as observed from that perspective, is only one particular manifestation of a potentially vast number of alternative development trajectories. A logical question is thus to ask how likely the historical trajectory that actually occurred is with respect to potential alternative histories.

This research was initiated by the late Arkady Kryazhimskiy (the former ASA Program Leader) and both TNT and ASA are committed to pursuing this challenging research question to honor the memory of this fine colleague and his intellectual legacy.

The starting point for addressing this question is a model developed by TNT to explore the long-term evolution of technological complexity [1]. This model was path-breaking in adopting an agent-based approach to the modeling of very long-term (multi-centennial time scales) technological evolution in which the interacting agents are technologies that emerge and potentially form new technological combinations (clusters). This model was adapted and around a million simulations were performed with it to generate a vast ensemble of alternative historical development trajectories for subsequent analysis (Figure 1).

This research was performed by TNT’s Jiangjiang Zhao in collaboration with Tieju Ma and Arnulf Grubler. At present the numerical simulation results are being analyzed by DYN collaborator Anna Shchiptsova. First results suggest that while it may ultimately not be possible to assign ex post probabilities to an actual historical development trajectory, some histories are more likely than others. This clustering effect arises from path-dependent behavior, suggesting that certain groups of development trajectories can be ascribed a higher degree of probability of occurring. Current research explores appropriate measures of distance to differentiate between alternative histories. Quite unexpectedly, we found that this new approach holds promise as a model diagnostic validation tool. Research into the historical past thus could yield novel methods to validate models of projecting the future, which is a staple application of the integrated assessment models developed in many IIASA research programs.