The Ecosystems Services and Management (ESM) Program’s Policy and Science Interface (PSI) group has advanced research into negative emissions technologies—ways of removing greenhouse gases from the atmosphere—investigating whether they are a viable way of tackling climate change. 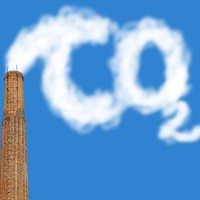 Research by PSI has quantified the potential impacts of the different negative emissions technologies (NETs) on factors such as land, greenhouse gas emissions, water, albedo, nutrients, and energy, to determine the biophysical limits to, and economic costs of, their widespread application [1].

The results of this work show there are numerous resource implications associated with the widespread implementation of NETs that need to be addressed before they can play a significant role in achieving climate change goals. The study concludes that there is no NET (or combination of NETs) currently available that could be implemented to meet the 2°C target without significant impact on either land, energy, water, nutrient, albedo, or cost, and so ‘plan A’ must be to immediately and aggressively reduce greenhouse gas emissions. 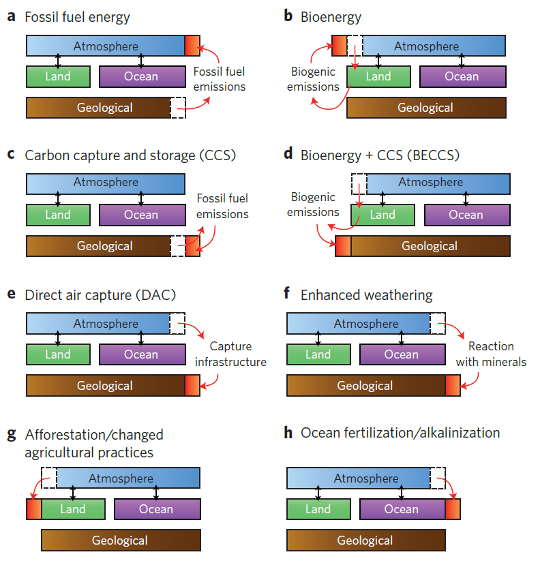 PSI research has also identified options to lower the pressure on land in order to deploy NETs such as Bioenergy with Carbon Capture and Storage at large scales. PSI’s systems dynamics model FeliX has also been further developed to assess the land scarcity that already creates tension between food security and bioenergy production [2].

The FeliX model was used to quantify emissions pathways when microalgae is used as a feedstock to free up to 2 billion hectares of land currently used for pasture and feed crops. Forest plantations established on these areas can conceivably meet 50% of global primary energy demand, resulting in emissions mitigation of up to 544 petagrams of carbon by 2100. The study concludes that—even though previously thought unattainable—carbon sinks and climate change mitigation of this magnitude are within the bounds of technological feasibility (see Figure 2). 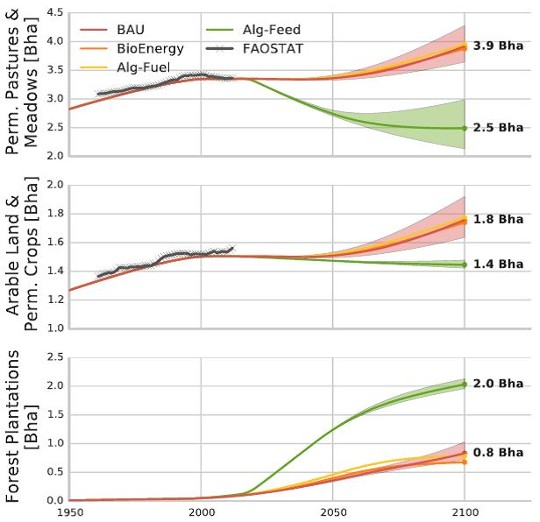 Figure 2. Time series (from top) of total extent of permanent pastures and meadows; arable land and permanent crops; and forest plantations. In the Alg-Feed scenario, microalgae is used to meet 40% of demand for feed, and the land (1.8 Bha) spared is converted to plantation. Shaded ranges show the effects of population growth, the leading source of systematic error on agricultural land use projections. Source: [2].

PSI contributed a chapter to, and initiated the involvement of ESM and Energy Program scientists in a major new reference work: The Handbook of Clean Energy Systems. This work provides a comprehensive view of current research on clean energy.

PSI was substantially involved in the organization of several policy relevant events on this topic. These included the Toyota High-level Symposium on Sustainable Cities in Toyota City, Japan, hosted by the Global Carbon Project (GCP)-Tsukuba Office and a further workshop on Negative emissions: Bridging societal and mitigation needs in Hokkaido, Japan. In addition, the GCP launched a new research initiative on Managing Global Negative Emissions (MaGNET) acknowledging the important role that negative emissions play in deep decarbonization pathways in the future.

Our Common Future Under Climate Change