A new study examines the potential of algae as a livestock feed source, and potential benefits for climate change mitigation and food security. 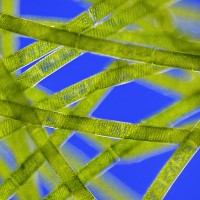 A new study from IIASA researchers suggests that algae could become an important feed for livestock that could potentially contribute to a major cut in greenhouse gas emissions over the next 80 years. The study, published in the open-access journal Carbon Balance and Management, examined how large-scale algae cultivation as a food source would affect land use for agriculture and greenhouse gas emissions from livestock production.

While livestock production accounts for around one-fifth of greenhouse gas emissions, the authors say the use of algae as a feedstock could greatly increase the efficiency of this production, even as demand for meat and poultry increases around the world.

The study shows that microalgae, which can be grown in salt water or produced on otherwise degraded land, can be used as livestock feed, freeing up land currently used for pasture and feed crops. This would stabilize or reduce the demand for crops like soybeans and corn and allow for better use of arable land and fresh water, helping to minimize food prices increases and deforestation. It would further allow for greater use of biofuels, which combined with carbon capture and sequestration techniques could transform the energy sector into a net carbon sink. In this way, microalgal feedstock could not only reduce carbon emissions, but also allow for the removal of carbon from the atmosphere, potentially reversing global temperature increases to roughly 1 degree Celsius in 2100, the study shows.

While algae cultivation has recently been discussed as a promising source for biofuel production—and microalgae production systems already established in several places around the world—the study is the first to examine the potential for algae as a livestock feed in connection with land use, food security, and agricultural greenhouse gas emissions. Studies have also shown that the nutritional content of algae-based feed is comparable to other sources such as fishmeal and soy, and that such feeds are palatable to livestock.

“Increasingly, we need to think of arable land as a scarce resource, and we need to optimize how we use it in order to make progress on fighting climate change.  This study shows algae could play a major role in freeing the land resources needed to simultaneously solve for climate change, energy demand, and food security,” says IIASA researcher Brian Walsh, who led the study.

The study was conducted using the FeliX model, which includes population, economic, and agricultural information to make projections of future greenhouse gas emissions. More information on the FeliX model can be found online at www.felixmodel.org.

In October, lead author Brian Walsh of the Ecosystems Services and Management Program at the International Institute for Applied Systems Analysis (IIASA) in Vienna, Austria, visited the Synthetic Biology Project at the Wilson Center and spoke with John Milewski about his research on Wilson Center Now.