Carbon dioxide emissions from fossil fuels are projected to stall in 2015, marking the first time that emissions have slowed without a concomitant economic decline. 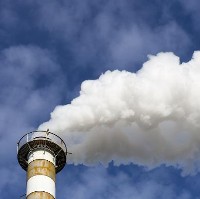 Global carbon emissions are projected to stall and perhaps even decline in 2015, according to the new research, which was published today in the journal Nature Climate Change.

According the new research, last year global CO2 emissions from fossil fuels and industry grew by just 0.6% – compared to 2.4% annual growth for the decade before. The projection for 2015 reveals a second year of slow growth or even a small decrease in global emissions of 0.6%. While declines in emissions have previously occurred during periods of economic crisis, this would be the first decline during a period of strong global economic growth.

“This is really a positive development,” says IIASA Deputy Director General Nebojsa Nakicenovic, a study co-author, and co-chair of the Scientific Steering Committee of the Global Carbon Project (GCP), which catalyzed the research.

“This is the first inkling that we might be close to a peak in greenhouse gas emissions. We still have a long way to go, but this could be an important sign of a transformation towards decarbonization in the long run,” he says.

This fundamental transformation towards the decarbonization of the energy system has been a major research focus at IIASA over the last decade. The 2012 Global Energy Assessment, for example, elucidated multiple pathways that could simultaneously achieve decarbonization at the same time as expanding energy access to the millions of people currently living without modern energy and electricity, and improving public health by reducing air pollution.

IIASA researchers have been involved in greenhouse gas emission projections since the beginning of climate change research in the 1970s, including research on both historical emissions as well as projections for future emissions based on multiple scenarios of economic and population growth and technological change. The new study, by an international network of researchers involved in the GCP, draws on this experience and the IIASA research network.

Along with the article in Nature Climate Change, detailed data were made available simultaneously in the journal Earth System Science Data.