Risk, Policy and Vulnerability (RPV) scientists showed how political risks to large-scale solar institutions planned for the Mediterranean and North African region depend on the specifics of the sector, size of project, and type of activity. They also discussed the water shortage challenges facing Iran. 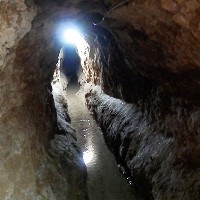 Past RPV research has focused on the risk of large-scale solar energy developments in the Middle East and North African (MENA) region. The question arose whether the governance structures in the region (following the Arab Spring) can provide a stable investment and regulatory environment to deal with possible large-scale impacts. Based on extensive work with stakeholders in the MENA region RPV researchers identified those aspects and geographic areas most prone to political risks in the solar power construction projects. The results show that the risks depend strongly on the specifics of the sector, size of project, and type of activity. Large-scale installations are at higher political risk. Given the rapid governance change in the region, it might take years to address challenges of institutional structure [1].

In water governance, RPV conducted research with collaborators in Iran, which faces a worsening crisis in governing its water resources. This joint research demonstrates how farmers’ risk perceptions, in turn influenced by their “worldviews,” are critical for understanding agricultural water use [2]. Based on plural perceptions, the researchers suggest that policy could be usefully informed by revisiting the traditional qanat socio-technological system, so that water, at times and in places, is delivered as a common-pool good and not as (currently) a public or private good.

The photograph on this page is of a qanat near Isfahan, Iran.