Risk, Policy and Vulnerability (RPV) research is critical in terms of overcoming the perception that insurance can contribute to risky behavior and thus disaster risk. It reveals how indexed systems, where payouts are triggered by an event parameter and not by loss claims, not only avoid moral hazard and encourage risk reduction, but can increase the access of the poor to much-needed safety nets. 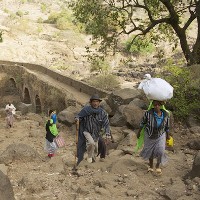 Research in 2014 focused on highly exposed farmers in the developing world. RPV developed a new index-based insurance approach using remote sensing data, which was tested in Ethiopia. The research showed how to counter the major problem of basis risk, or the risk that the triggering parameter does not correlate well with losses [1].

Insurance critics and advocates alike point out that reducing the unacceptably high number of fatalities and property losses from disasters must be the first priority for climate adaptation. Yet, after a point, reducing losses is prohibitively expensive—the resources can be used for other social purposes—meaning that trade-offs must be considered. Policymakers and academics are thus calling for a new balance between reduction and transference of the risks from climate extremes. RPV researchers elaborate on this balance by targeting risk reduction and risk financing to different layers of risk, including a layer that represents a possible limit to adaptation and also shows how risk financing can complement and stimulate risk reduction [2].

Most recently, RPV has contributed to a book on the Asia-Pacific region for the Asian Development Bank Institute, where researchers argue that governments, donors, and multilateral development banks can help enhance the implementation of disaster risk reduction measures before events strike as well as increase the provision of risk financing options by 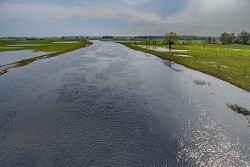 Recent flooding of the River Biebrza in Poland; © Janmiko1 | Dreamstime

Based on an earlier assessment of the European Union Solidarity Fund (EUSF) to determine its solidarity, robustness (stress testing) and propensity to reduce risks [3], testimony was given at a European Parliament public hearing suggesting that the Commission consider transferring an upper layer of the Fund’s risk with commercial reinsurance or directly to the capital markets. This would help protect the Fund against increasing risk from climate change and multiple catastrophes. Another (more far reaching) suggestion made by RPV was to change the EUSF from an ex post compensation instrument to an ex ante reinsurance instrument to backup national safety net programs, which the authors argued could increase both the efficiency and solidarity of the Fund by leveraging private financing and enhancing incentives to reduce risk.