A global perspective on air pollution

In 2013, the Mitigation of Air Pollution and Greenhouse Gases (MAG) Program achieved global coverage of its GAINS (Greenhouse gas – Air pollution Interactions and Synergies) tool for the systematic assessment of co-benefits strategies, in close collaboration with a large number of national teams. 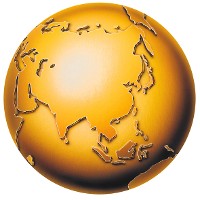 Achievement of global GAINS coverage was facilitated by national implementations of the GAINS model for specific countries, which were then used by local teams for their own national policy analyses of co-benefits.

With this database, the GAINS model has been used to construct a range of global air pollution scenarios up to 2050 for alternative assumptions on dedicated policy interventions on emission controls.

Scenarios of emissions for 10 short-lived pollutants have been developed and made available to the scientific community as input for climate-chemistry models.