IIASA Acting Research Group Leader Sebastian Poledna has won a paper competition on the subject of complexity and macroeconomics, organized by the Rebuilding Macroeconomics (RM) Network. The network is funded by the Economic and Social Research Council (ESRC) in the UK, and hosted by the National Institute of Economic and Social Research (NIESR), which is the oldest independent economic research institute in the UK. 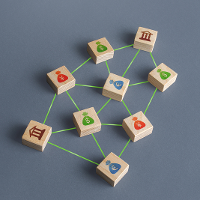 Lead author Poledna will present the paper Economic Forecasting with an Agent-Based Model with his coauthors, IIASA alumni Michael Miess and Cars Hommes, as part of a Zoom event on Friday, 21 May from 14:00-16:00 BST. There will be an opportunity for participants to discuss how they see complexity science contributing to our understanding of the macroeconomy with the authors.

In the awarded paper, Poledna and his colleagues designed and implemented a new prototype of an economic agent-based model (ABM) that is suitable for economic forecasting and evaluating policy measures. Their ABM for a small open economy uses micro and macro data from national sector accounts, input-output tables, government statistics, and census data. The model incorporates all economic activities as classified by the European System of Accounts as heterogeneous agents. With ABMs encompassing more details at the micro-level grounded either in theory or in observations, one can expect to obtain more reliable responses to shocks, be it policy interventions, drops in exports or imports, or migration flows.

The need for more realistic economic models was made particularly clear after the financial crisis in 2007/08, and the subsequent Great Recession, which was missed by models currently in use by central banks and large international institutions. In a recent application, the authors have used the detailed structure of the ABM to forecast the medium-run macroeconomic effects of lockdown measures taken in Austria to combat the COVID-19 crisis. Other potential applications of the model include stress-testing and predicting the effects of monetary or fiscal macroeconomic policies.

The award highlights the authors’ development of a more realistic economic model that helps to better understand economic systems – an important research focus of the IIASA Advancing Systems Analysis Program and its Exploratory Modeling of Human-natural Systems Research Group.